Doom in the Tomb is undoubtedly the most significant Hearthstone event to date. 23 Wild cards have returned to Standard format for two months, and they have been given to all players for free (not disenchantable, so no free dust, sorry). The meta has already changed completely: the effect is almost comparable to an entire new expansion.

But what are the practical consequences for free-to-play players? Sure, everyone gets the returning cards, but how much can they do without support from other expensive cards? Does the increased power level throughout the meta help or hinder budget players? In this article, I’ll examine the state of budget play for each class and what the returning cards can and cannot help budget players accomplish. 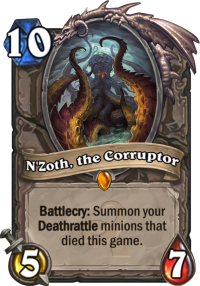 The power level of the returning neutral cards is off the charts: Emperor Thaurissan, Sylvanas Windrunner, The Curator, Ragnaros the Firelord, and N'Zoth, The Corruptor are a huge buff to everyone’s collection. However, this aspect of the event is not necessarily a great boon for budget players.

Just think about which decks have the most to gain:

Emperor Thaurissan is at its best as a combo enabler. It has made its way to Malygos Druid and Holy Wrath Paladin, which are hardly budget decks. It is also found in Resurrect Priest and multiple Highlander decks, which are among the most expensive decks in the game.

Sylvanas Windrunner and Ragnaros the Firelord have found homes in all kinds of Highlander decks, which are notorious for being expensive.

N'Zoth, The Corruptor is used in midrange (Highlander) decks as the final major threat and in control decks as the main win condition. These archetypes typically require a number of expensive cards.

It is interesting to consider whether a budget control deck would be possible with the neutral Deathrattle package: Rotten Applebaum, Khartut Defender, Sylvanas Windrunner, and N'Zoth, The Corruptor. However, most control cards are at least epics, such as almost all of Warrior’s removal spells.

The only class that has been budget control friendly in the past is Paladin, because its entire removal suite is available on a budget: Wild Pyromancer, Consecration, Equality, and Shrink Ray can all be easily included in a budget deck. Adding the N’Zoth package seems like a way to get something done, but even then the deck would miss out on Tirion Fordring, Zilliax, Shirvallah, the Tiger, and Kangor's Endless Army, leaving it with a weakened win condition and healing. Nonetheless, this is the first time since the rotation that any kind of even semi-viable control deck can be built on a budget.

The returning neutral cards are powerful and give a major boost to various combo, Highlander, and control decks. However, these are mostly out of reach of budget players. Luckily, the event has also made some affordable decks very powerful. Let’s examine the situation class by class. 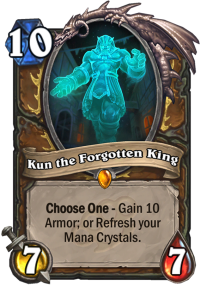 Druid is not a budget class right now. Its returning class cards are Astral Communion, which is a meme card, and Kun the Forgotten King, which is a powerful card that sees play in practically all Druid decks, but all current Druid decks are Quest Druid decks.

The win condition of current Druid decks can differ between Chef Nomi, King Phaoris, Malygos, and infinite copies of Kun the Forgotten King with Elise the Enlightened and Baleful Banker, but none of them are anywhere near budget decks, because they all run a number of Legendary cards, including Untapped Potential, Wardruid Loti, and Flobbidinous Floop.

While it is always possible to build some kind of Midrange Hunter deck on a budget, there are currently no notable budget Hunter builds on the ladder. Of the returning cards, Lock and Load is a meme card and Call of the Wild is a buff to Highlander Hunter, which also received buffs from the returning neutral cards. This has made Highlander Hunter the dominant Hunter archetype, and it’s not a cheap one to build.

Mage has been a surprise to me. The return of Babbling Book and Flamewaker seemed set to bring Tempo Mage back, but Tempo Mage has struggled a lot. There are no notable builds around at the moment, and most Mage players have moved back to Highlander Mage that received a major buff from Emperor Thaurissan, Sylvanas Windrunner, and N'Zoth, The Corruptor. Sadly, Highlander decks are very expensive even with multiple free Legendary minions in the mix.

Who am I? None of your business! Secret Paladin has returned with Mysterious Challenger and Avenge making a comeback to the meta. The two cards support each other perfectly: Avenge is the most powerful Secret the class has ever had, and Mysterious Challenger draws and plays multiple cards while not giving up any stat points.

Alas, guess what has become the most powerful Paladin deck? Yep, Highlander Paladin. The returning neutral cards support Highlander decks so incredibly well, and Sylvanas Windrunner and Ragnaros the Firelord can be seen in action in this archetype as well.

However, there are also budget options available for Paladin. For mere 4000 dust, you can build a more aggressive Secret Paladin, such as this one from Invictus:

The archetype can be built even cheaper. Here’s my 1360 dust brew of the same archetype that relies on Reborn minions and their synergy with Redemption:

While the strongest Paladin decks are expensive, at least some viable budget options exist for the class.

Priest received Vol'jin and Lightbomb. Both are cards that have seen extensive play in the past, although Vol'jin has not found a deck for itself in the current Standard meta. Lightbomb, on the other hand, has joined Mass Hysteria and Plague of Death in Resurrect Priest’s arsenal.

The new cards are not suitable for budget decks, but Combo Priest remains a top tier deck, so Priest is still playable relatively inexpensively with decks such as this one:

Because High Priest Amet and Psychopomp are mandatory for the archetype and Bwonsamdi, the Dead is highly useful, a fully budget build is not possible.

Rogue received fancy tools for thievery in Swashburglar and Shaku, the Collector. They can be great support for Quest Rogue, but the archetype seems a bit slow for the current meta. Tempo Rogue decks have experimented with the cards, but they do not seem to be mandatory inclusions. The new meta has given rise to a new Rogue archetype as well: perhaps you already guessed it, yeah, it’s Highlander Rogue, and that’s expensive.

It is probably possible to build a Budget Tempo Rogue, but so far a viable list has not appeared. The full-cost Tempo Rogue decks cost around 8000 dust, which makes them medium-cost decks overall.

Shamanstone. It’s the word on everyone’s lips when it comes to the current Hearthstone meta. The return of Evolve has had the biggest impact on the meta, especially when it is now combined with Desert Hare and Mogu Fleshshaper for some insane early-game swing turns. Oh, an old star player called Thing from Below also came back, but it’s not a totem meta, so most people have not even noticed.

Evolve Shaman decks come in two varieties: the Quest variant, that uses a Quest Shaman core with its Lackeys, and the Token variant, which uses Thunderhead and Bloodlust. The token variant is cheaper, as it costs only between 4000 and 5000 dust. Here is an example build:

The Quest version costs around 8000 dust, so it is a medium-cost deck, not quite a budget build anymore.

If you are not interested in the Evolve hype train, the good old Murloc Shaman is also still doing well, and you can build that one for mere 2400 dust:

Warlock has been struggling in Saviors of Uldum, with Zoo as its only viable archetype. Doom in the Tomb does little to change that, because it gives Warlock Renounce Darkness, another meme deck card, and Imp Gang Boss, which is a good card – for Zoo.

The current Zoo Warlock builds are not very cheap. With several expensive cards such as Crystallizer, Diseased Vulture, Magic Carpet, Leeroy Jenkins, and Sea Giant forming the backbone of most current Zoo lists, this traditional budget archetype is now firmly in the medium-cost camp at around 8000 dust.

However, Zoo can still be a budget deck too. Here’s my 1280 dust take on the archetype:

Warrior’s returning cards are Bloodhoof Brave and Varian Wrynn. Varian saw some play in Tempo Warrior back in the day, but it was cut from the lists fairly quickly. Bloodhoof Brave, on the other hand, used to be a solid card, but it has not found its place in the current meta.

Warrior overall has struggled now. The increased power level and early swings have hit Control Warrior hard, and it is still looking for the right response to the number of threats the current meta presents. Aggro Warrior and Highlander Warrior are doing slightly better, even though they also took a bit of a hit. Highlander Warrior, like all Highlander decks, is extremely expensive, and Aggro Warrior at around 8000 dust is a medium-cost deck.

There have not been any budget Warrior decks for some time now, and it does not look like there will be any in this expansion.

More Power for Everyone, but the Rich Get Richer

Overall, the effects of Doom in the Tomb for budget players are complicated.

There are now two cheap top tier decks: Evolve Shaman and Combo Priest, at around 4000 dust each. This is more than the Combo Priest that was the lone representative of cheap decks on the top tier before the Wild event.

However, Highlander decks have become more powerful across the board, and they have wiped out many alternative archetypes. Because Highlander decks use a significant number of Legendary cards, they are among the most expensive decks in the game, and having a Highlander build as the most powerful archetype for more than half of the classes is tough for budget players. This may be a sign of things to come in the next expansion as well: Highlander decks are at their best when the card pool is large and therefore individual cards are easy to substitute, and the next expansion is not a rotation expansion, so the card pool will get bigger – kind of, anyway, because the Wild event cards will be leaving when it comes.

The increased power level overall has made life very difficult for cheap decks that do not benefit from the new free cards. Token Druid, for example, used to be a reliable budget deck, but it has not received improvements for some time, while decks around it get stronger and stronger. I still have hope that budget versions of Midrange Hunter and Tempo Rogue can be built for the new meta, so that those classes, especially Hunter, do not slip away from budget players.

Nonetheless, the returning cards can give even budget players a taste of some real power. Especially on slightly lower ranks it is possible to just add Ragnaros the Firelord into your deck as a curve-topper and enjoy some purging by fire.