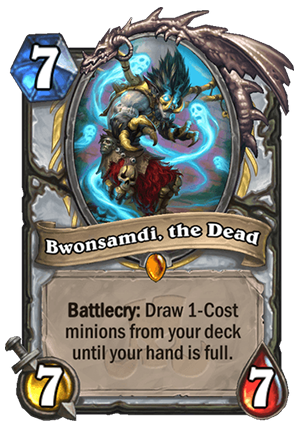 Bwonsamdi, the Dead is a 7 Mana Cost Legendary Priest Minion card from the Rastakhan's Rumble set!

Battlecry: Draw 1-Cost minions from your deck until your hand is full.

If I have seen this card in vacuum, I wouldn’t like it at all. However, after seeing it together with Spirit of the Dead, I enjoy the flavor, as well as the card’s potential. So, here’s the thing – if you play a deck that runs Spirit of the Dead, you most likely also want to run Bwonsamdi (the only exception is Combo Priest, which would play the card for a 0/3 Stealth body, not for the effect). Those two just belong together.

In a deck without Spirit of the Dead? Hmm, very hard to say. Let’s start analyzing it by looking at the stats. 7 mana 7/7 is War Golem, which is obviously something you would never put into your deck, but it if gets a nice effect, the stats are good. It’s not a huge tempo loss, since you actually develop a meaningful body. That’s good. But a regular Priest deck won’t use this effect very well, since it does not run 1-drops. Northshire Cleric is the only common Priest 1-drop, and given that you mulligan for it, by the time you play Bwomsandi, you will probably have only one or maybe even none left in your deck. That’s not a great use.

Do you want to put more 1-drops into Priest? Maybe, if you’re playing a sort of Tempo / Aggro Priest. But I just don’t see it. Even in a deck like that, you still don’t want to put THAT many 1-drops. Just think about Quest Hunter and why the deck is bad. Playing a lot of 1-drops is not a good idea – they are impactful on Turn 1, but get much worse in the mid game and are nearly useless in the late game. If we’re talking about regular 1-drops without late game scalling, the only thing that Bwomsandi would do in such a deck would be increasing the quality of further draws. But that’s not very important in a deck that wants to finish the game just around the time it drops this Legendary. So no.

The only application outside of the Spirit of the Dead synergy I see right now is in APM Priest. Your combo pieces – Stonetusk Boar and Test Subject – are 1 mana minions. But then again, I think that Witchwood Piper is just better – while it draws only one, playing him on T4 is much easier. On T7 most of the time you will be looking at Psychic Scream, playing a 7 mana 7/7 is waaay too slow when you’re staring at lethal or nearly lethal on the board (which is basically nearly every game).

Card rating: 5/10… basically, it solely depends on Spirit of the Dead now – a deck that runs Spirit of the Dead to shuffle a bunch of 1 mana copies of minions MIGHT (and probably will) include Bwomsandi as its card draw, but doesn’t have to. It needs more synergies to be seen as something more than a card complementary to Spirit of the Dead.