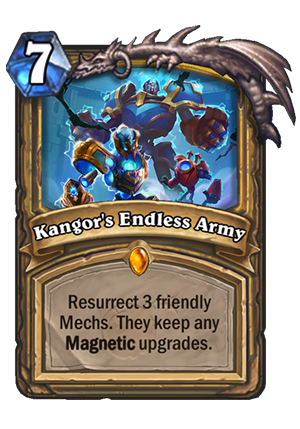 Legendary spells sure do have some powerful effects, it seems. This card could be somewhat compared to Diamond Spellstone – it has similar upsides and downsides. But here is the most important thing – in both cases, you need to build your deck around it.

This does not look like a card that you can throw into your Mech Paladin deck and it will work perfectly. If you play a regular Mech deck, you most likely play a bunch of smaller Mechs too, for the sake of synergies and bodies to put Magnetize minions onto. And those minions will often die without getting buffed by another Mech first, flooding the pool of potential resurrect targets with weak targets. In the worst case scenario, it will be similar to the 7 mana Call to Arms – bad.

However, resurrecting 3 big minions, especially ones with immediate effects, or Taunt, can be insanely powerful. Just hitting one minion buffed by Zilliax and one buffed by Annoy-o-Module would be really sweet – two Taunts with Divine Shield, one with extra Rush & Lifesteal. Big board, immediate impact, all-around powerful card.

But the problem is that there is no way for you to guarantee hitting those in a deck full of Mechs. That’s why I think that this card would fit into something more like a Recruit Hunter. You CAN play Kathrena Winterwisp in a deck with lots of Beasts, small and big, but it’s not very consistent. You want to play her with only bigger Beasts in your deck, so you always pull something good. Or the Priest’s Spellstone example I gave earlier – sure, it’s very powerful if you build the right deck (and revive a few big minions or your combo cards), but you don’t slam it into your random deck with lots of small bodies. And I think that this card might be a similar case.

To be completely fair, it MIGHT be played in a regular Mech Paladin too, especially if you make it Magnetize-heavy. Just reviving one of those big Magnetize minions and maybe 2 smaller ones could be good enough. However, I think that the best way to approach this card is playing basically no early game Mechs, and starting with the Midrange ones (like 4 mana or more). Then even a low-roll on this card would mean reviving let’s say 12 mana worth of minions for 7 mana. Maybe Odd Paladin? The deck has a solid early game thanks to the Hero Power anyway, and then if you slam some mid game Mechs, this card can be a massive win condition. Or even a Spiteful Paladin? This is an amazing card to get from Grand Archivist, and 7-drops aren’t that bad to get from Spiteful. It will definitely be an interesting deck building challenge, and I’d imagine that it should see lots of play.