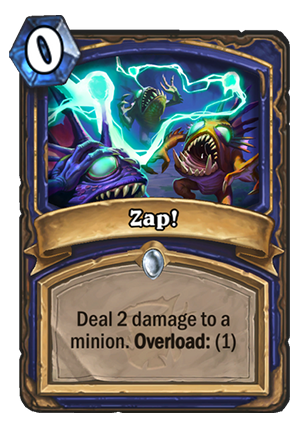 Zap! is a 0 Mana Cost Common Shaman Spell card from the The Witchwood set!

The material components for this spell are wool socks and a rug.
Tweet

It’s a bit like Shaman’s version of Backstab – 0 mana to deal 2 damage with a slight downside. In case of Rogue, you can’t target damaged minion, in this case, you get 1 point of Overload.

However, the biggest difference between those two is the context of each class. In Rogue, 0 mana cards, especially spells, get extra value. You can use them to activate combos, to draw cards from Gadgetzan Auctioneer, to buff Questing Adventurer, to gain one charge on the dormant Sherazin, Corpse Flower etc. Rogue decks are also much heavier on cycle in general.

Shaman, on the other hand, doesn’t really combo with 0 mana cards, just as he doesn’t have lots of ways to cycle through the deck. And so, dedicating a slot to a 0 mana card that doesn’t even synergize with your deck doesn’t sound great.

That said, the Overload part doesn’t have to be a downside. If a deck built around Overload mechanic would be a thing, this might actually fit right into it – like, this already combos quite nicely with Unbound Elemental on Turn 3, but that’s of course not enough.

It’s not a bad card, but I don’t really see it making a cut in your average Shaman deck. Tempo is nice, but you might run out of cards too quickly.