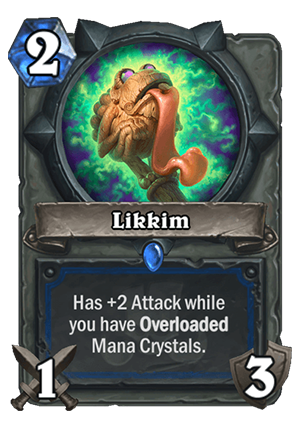 Has +2 Attack while you have Overloaded Mana Crystals.

I don’t exactly know what licking has to do with Overload, but the flavor behind this card’s name & art is quite cool.

The card (mechanics-wise, not flavor-wise) reminds me of Spirit Claws, another 1/3 weapon that turned into a 3/3 weapon once you met a certain condition. In Spirit Claws’ case, it was having a Spell Damage minion on the board. The weapon was overpowered at 1 mana, going into both Aggro and Midrange Shaman builds. It was nerfed to 2 mana, after which it basically stopped seeing play. I’m glad that they didn’t make the same mistake for a second time and Likkim starts at 2 mana.

But at the same time, unlike having Spell Damage on the board, being Overloaded seems like an easier condition to meet. Especially since it counts BOTH the turn when you overload your Crystals and the turn when you’re actually Overloaded. So for example – if you play this on T3 with Lightning Bolt, you can attack for 3 right away and you will be able to attack for 3 next turn too.

That’s why I believe that this card is quite strong. Playing just a few Overload cards will make keeping it at 3 Attack quite easy, actually. That alone will make it quite insane in aggressive Shaman – you want to play cards like Lightning Bolt, Lava Burst, maybe even Feral Spirit.

This card might also push cards like Zap! or Voltaic Burst into viable range, especially in some kind of Midrange/Token Shaman with Thunderhead. I think that this kind of archetype is quite close to being viable already, it just needs a little push.

Of course, this card’s power heavily depends on the Overload options available. For example, slow decks right now run only Lightning Storm and Volcano, which obviously don’t combo THAT well with the weapon, which you’d rather use to prevent your opponent from developing a board worth AoEing, not hit him after you AoE. But with one or two more good Overload cards, maybe even those kind of decks could play it.

Overall, I think that this weapon is very strong, especially in an aggressive Shaman. Getting yourself Overloaded is not THAT difficult, and 9 damage for 2 mana that can also be used as a way to protect your own board vs other fast decks… it’s just strong.