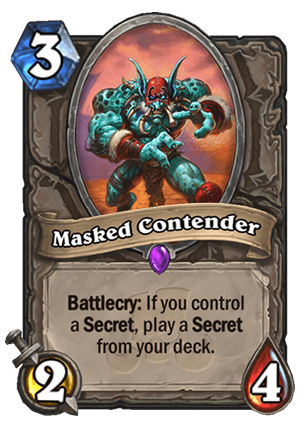 Battlecry: If you control a Secret, play a Secret from your deck.

Knew Mysterious Challenger back when he was a Mysterious Squire.
Tweet

Masked Contender seems like a more balanced version of Mad Scientist, but given that Mad Scientist was one of the best cards in Hearthstone ever (and I’m not exaggerating), a weaker version of it doesn’t necessarily have to be bad. Actually, it looks pretty decent. If the condition is met, he’s insanely powerful – 3 mana 2/4 that draws and immediately plays a card from your deck is something ot watch out for. You know how powerful Kirin Tor Mage can be – yes, it has better stats, but the point is that getting a nice tempo boost can go a long way in the early game. And this effect is obviously even better, because you pull that card from your deck, not from your hand, so you don’t lose a card advantage for the sake of tempo.

The card would probably work best in the Hunter because of curve. You play a Secret on T2, then Masked Contender on T3, pulling another Secret from your deck. Depending on the matchup, scenario and then Secret you’ve played on T2, there’s a significant chance that it will stick. If it’s something like Rat Trap, it probably will (but even if it won’t, you don’t mind). Secret that trigger when opposing minion attacks are also inactive unless your opponent has something to attack with etc. In the end, you should be able to pull it out quite consistently on the curve.

It’s also quite easy in Paladin, because you can play a Secret + this on T4, but then again, it doesn’t get as much value in Paladin.

And finally, the card is obviously strongest in the Mage, but it’s also the hardest to trigger it there. If you play a Secret on T3 and this on T4, you play off-curve (it’s still worth it most of the time, but it’s not the most optimal). To combo it with a Secret on the same turn, you need 6 mana, which is quite a lot. But then again, the pay-off is even bigger than in case of Hunter – a 3 mana 2/4 that draws a 3 mana card and plays it immediately is nuts.

The condition is not that hard to meet in a Secret deck, but your opponent will also be able to play around it by triggering your Secret (not to mention the situations in which you don’t draw any Secret early, for example) – so you can’t take that effect for granted. And a 3 mana 2/4 is not great if you won’t get this effect off. But still, I think like this Battlecry is good enough to justify putting it into Secret decks even if it won’t work sometimes. Secret Hunter is definitely a deck that will at least try it out. Secret Mage too, maybe, but the build is quite weak right now.