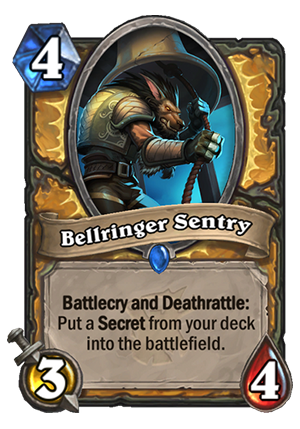 Bellringer Sentry is a 4 Mana Cost Rare Paladin Minion card from the The Witchwood set!

Battlecry and Deathrattle: Put a Secret from your deck into the battlefield.

"Who are you? Eh, none of my business."
Tweet

It’s like a toned down version of Mysterious Challenger. However, the “toned down” doesn’t mean “bad”. Challenger was pretty broken when it worked, but this is still very good… in the right deck.

One thing to keep in mind that Mysterious Challenger was in Standard for a whole other year (2016) before it finally rotated out in 2017. But he didn’t see almost any play during Year of the Kraken. Why? Because not only was Avenge, arguably the most powerful Secret, rotated out, but the deck has also lost early game tools like Shielded Minibot and Muster for Battle.

The “early game tools” part is somewhat fixed. Paladin’s early game is solid right now, maybe not Minibot & Muster good, but good enough. But lack of good Secrets is still a problem. Right now, after Getaway Kodo rotates out, Paladin will have exactly 4 Secrets in Standard – Eye for an Eye, Noble Sacrifice, Redemption and Repentance. Eye for an Eye is obviously bad, Repentance is very meta-dependent… So we’re basically left with Noble Sac and Redemption, and neither of those is really, really strong.

On the other hand, it’s a 4 mana 3/4 that tutors AND plays two cards from your deck. This part is insanely strong. You pay one extra mana (because those are 3-drop stats) and your payback is worth much more.

Right now I have mixed feelings about this, because the effect is very powerful, but no Avenge or other powerful Secrets makes it much worse. You’d realistically need to put like 4-5 Secrets into your deck to make it work consistently (if you put 2-3, you’d draw them before this too often), and we might just not have enough good Secrets.

If a strong Paladin Secret gets revealed, I could see this being played in lots of Aggro/Midrange lists. With the current pool, I’m not sure. Still, the card has lots of potential – remember that it will be in Standard for the next 2 years, and it’s just waiting for a good Paladin Secret.