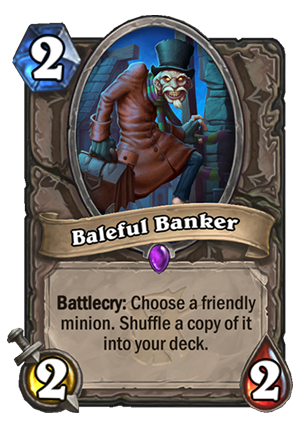 Baleful Banker is a 2 Mana Cost Epic Neutral Minion card from the The Witchwood set!

Battlecry: Choose a friendly minion. Shuffle a copy of it into your deck.

It’s a Neutral version of the Manic Soulcaster from Gadgetzan. While 3/4 for 3 is better than 2/2 for 2, the fact that it’s Neutral and it’s cheaper might work for it. To be fair, Manic Soulcaster has seen some play in Reno Mage, to copy Reno Jackson, Kazakus and such. Other decks might also find it useful either as a way to get more value in a long, grindy game or possibly even activate some combos.

Just as an example, if you run Holy Wrath Paladin with Molten Giants (now in Wild), if you draw a Giant, but have no cards in your deck, plus you’re low on health (13 or less), you can play Giant, play this and Holy Wrath. Of course, that’s not a reliable deck anyway, but it might make it slightly better.

It also combos nicely with all kinds of Recruit mechanics. You can play (or Recruit) a big minion, get another copy of it in your deck and Recruit it again.

The card doesn’t strike as a very powerful one, but it has some potential.