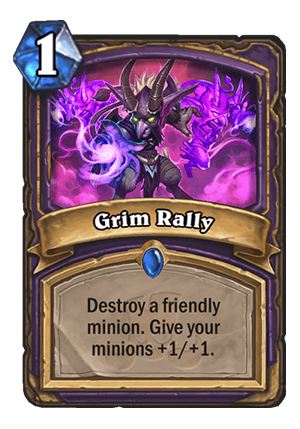 Destroy a friendly minion. Give your minions +1/+1.

It’s a Mark of the Lotus with a huge downside – you need to kill one of your own minions (which would get buffed otherwise) in order to activate it. Yes, different classes and such, but I’d argue that Token Druid was even better at flooding the board than Zoo Warlock. But Mark of the Lotus was pretty broken, so I guess that they didn’t want to repeat it.

As for the downside, I’d say that it’s pretty punishing. The smallest minions you run in Zoo are 2/1’s, so if you sacrifice that, you get -2/-1 on the board. So if you buff even 4 other minions (which would be an above average scenario), that’s only +2/+3 on the board if you count the destroyed minion’s stats. Yes, there are some upsides to this situation, like having better trades, playing around Defile or making your board more resilient to AoE in general. But having a 5 minions board is not your average scenario, though. If you have let’s say 3 minions, then sacrificing one of them to give +1/+1 to the other two doesn’t seem like a great deal.

The card makes more sense in the Wild format I’d say, where we have cards like Forbidden Ritual, Imp Gang Boss or Imp-losion – stuff that lets you summon a bunch of 1/1’s. Also, the card combos nicely with Nerubian Egg, activating it while buffing the rest of your board.

Maybe Zoo will decide to run Devilsaur Egg and this will be one of the ways to trigger it? That’s a possibility, because this would be a good play. But in something like the current Heal Zoo, I just can’t see this card working that well. It’s okay with 4 minions on board in total, good with 5 minions and great with 6 or more – but given that you often have only 2-3 minions on the board, this can be a dead card quite often.

I could see this being played in a really, and I mean really board-floody version of Zoo, but can the deck get much more board floody with the current cards than it is right now? It can try out stuff like Fiendish Circle, but we would need something akin to Forbidden Ritual to really make it work.

P.S. Not sure why people are talking about Cube Warlock, how does it belong to Cube? You’d rather gain 4 life than give +1/+1 to the other minions on your board (remember that the minions coming out of Cube won’t be buffed), because often there will be no other minions to buff at all.