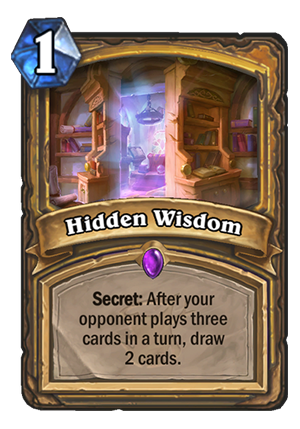 Hidden Wisdom is a 1 Mana Cost Epic Paladin Spell card from the The Witchwood set!

Secret: After your opponent plays three cards in a turn, draw 2 cards.

Find your own wisdom. Perhaps behind the couch.
Tweet

It’s a Rat Trap, but for Paladin! And honestly, just like with the Rat Trap, I don’t really see it working too consistently. The thing is, look at how often your opponent plays 3 cards in a single turn before the late game. With Coin, maybe, but still not always (they often e.g. use Coin on T3 to play a 4 mana card, so 2 in total).

Unlike Rat Trap, however, which is a huge tempo gain once it procs, this one isn’t. You get +1 card advantage, which is like playing a 1 mana Arcane Intellect. Sounds great, that’s true, but you can’t control it and it’s delayed. Until your opponent plays those three cards in a single turn, which can be 5 or even more turns from whenever you’ve played it, you are a card behind.

I mean, if you pull this from the Bellringer Sentry, then you technically get it for free from your deck, and thus gaining +2 card advantage might be juicy. The problem is that you’d rather have some Secrets which gain immediate value, interact with the board, as the Bellringer Sentry himself is a low tempo play.

It might see some play thanks to the Bellringer Sentry, but I don’t think it’s too powerful. Heavily depending on the meta, it will get more value when either decks playing lots of 1-drops (especially stuff like Fire Fly) or combo deck pop out in the meta.