It can sometimes be difficult to remember exactly what condition must be met for a secret to trigger in Hearthstone. These secret cheat sheets will give you a quick way to know which secrets are possible, and what you can do to play around them.

We’ll cover the Secrets that are currently in Standard, because a) it’s a much more popular format and b) the sheer number of Secrets in Wild format makes the cheat sheet less and less usable each expansion (because your turn timer will run out by the time you look through and analyze all of them anyway).

We’ve also included a general guide on playing around Secrets from each class – what to do first, what minions you want to play or attack with etc.

All secret cheat sheets have been updated for the recent rotation and Rise of Shadows expansion!

Hunter’s secrets can be quite powerful and take a lot of tempo away from their opponent. The easiest one to identify is Snipe. Either play a low health minion that you don’t really need (preferably one with Deathrattle), or a bigger minion that will survive the damage. Most of Hunter Secrets trigger when attacking the opponent’s Hero or minions. If your board is full of low health minions, then there’s a high chance that you face Explosive Trap. If that’s the case, try buffing them out of range or trading into minions first. Trading into minions might help you identify whether you face Freezing Trap (that’s why open attack with a minion you don’t mind having back in your hand – e.g. a cheap minion or minion with a powerful Battlecry) or Snake Trap. Freezing Trap is more likely if you have only one big minion on the board. Finally, Misdirection, while not popular, is also best triggered with a small minion. No matter what it hits (including your Hero), it won’t be a big deal. If no Secrets trigger after doing all of it, then it means that your opponent has Rat Trap – there are two ways to play the game since then. You can either limit yourself to two cards per turn (it might not be a problem in some decks), or you can trigger it and try to kill it in the same turn. Try to not trigger it until you’re ahead or want to AoE the board anyway, because otherwise the 6/6 can crush you. 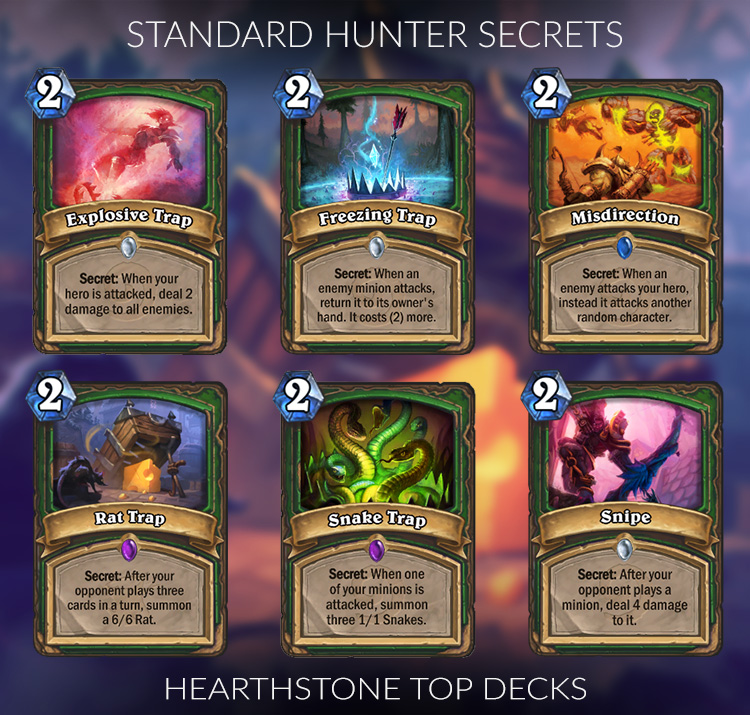 Mage has a wide variety of secrets that can really force their opponent into bad plays. In general, you should check for Counterspell first, since it’s the most popular one (do it by playing Coin or another cheap spell – ideally if it targets minion, then you can also play around Spellbender). If you think that your opponent might have Mirror Entity, open your turn with a small minion in case it gets copied. When attacking your opponent, lead attack with the lowest value minion, since it can die to Vaporize. 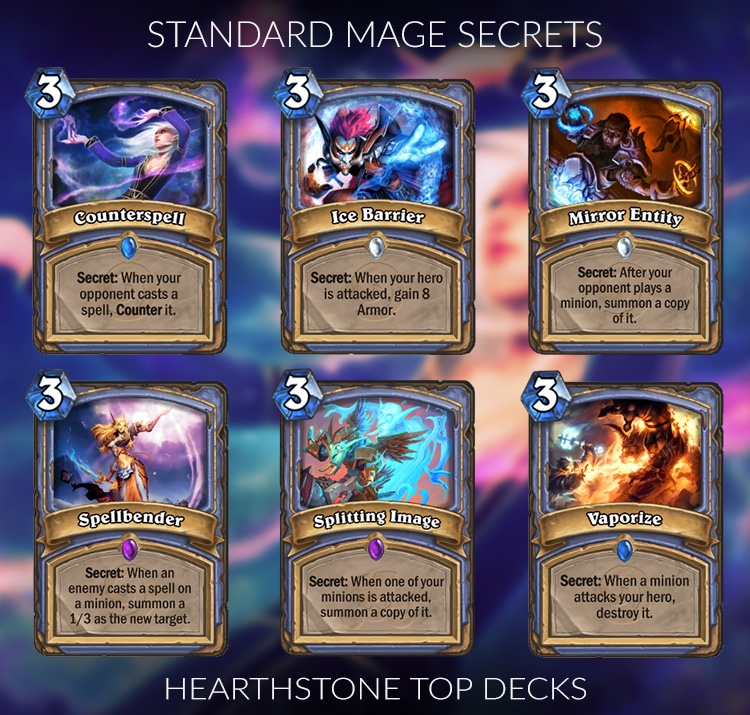 Even though Paladin Secrets are the least impactful, they can be quite difficult to identify, since they trigger under many different conditions – hitting minion, killing minion, hitting Hero, playing spell, playing minion and playing three cards in a turn. To best play around Paladin Secrets, you need to follow a few rules. When you attack into one of their minions, expect that it will survive thanks to either Autodefense Matrix or Noble Sacrifice. Before you commit and try to clear board with AoE, you might want to make sure that Never Surrender is not present. Sometimes it’s worth going for a bigger AoE just in case, for example if your opponent has only 1-2 health minions on the board, you might still want to play Flamestrike over Blizzard because of it. If you don’t want to AoE and just play another spell, do trades first so lower number of minions will get buffed in case of Never Surrender. When you pick which minion to kill, try to go for the smallest one (preferably a 1/1 Silver Hand Recruit) first in case of Redemption. Avoid killing Divine Shield or Deathrattle minions first, because they take biggest advantage of Redemption. When you play your minions – open with the lowest health one to play around Repentance. Eye for an Eye is probably the least harmless one – just remember to attack with the lowest attack minion first when you hit your opponent. It will rarely do more than 2-3 damage. And finally, just like in case of Rat Trap, if you eliminated all other Secrets, it means that it’s Hidden Wisdom. If you play 3 or more cards in a single turn, Paladin draws 2 cards. To be honest, it’s not as powerful as Rat Trap, so if you play a deck that wants to play many cards in a single turn, just do it and let them draw. However, if you can play around it, try to do it as long as possible – delaying the card draw is obviously good, because they will have less options. 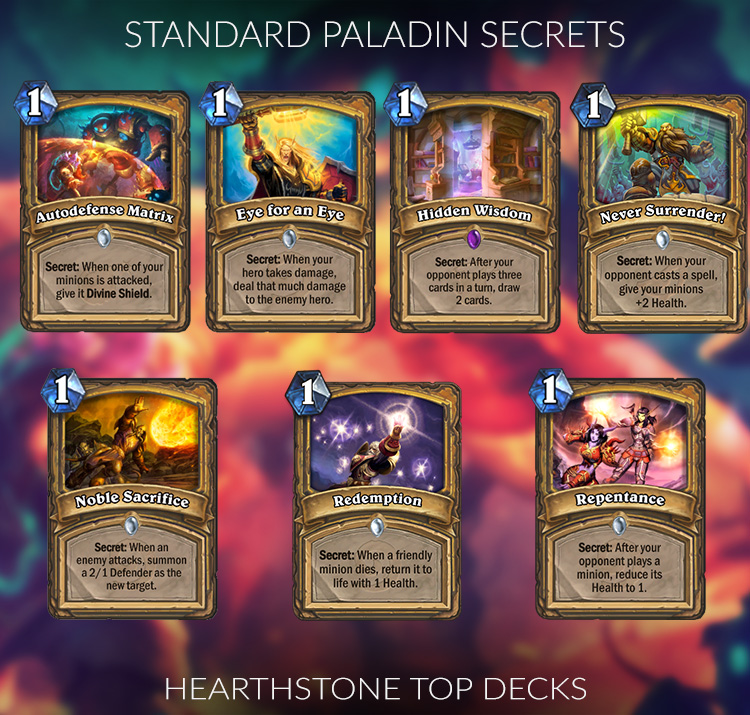