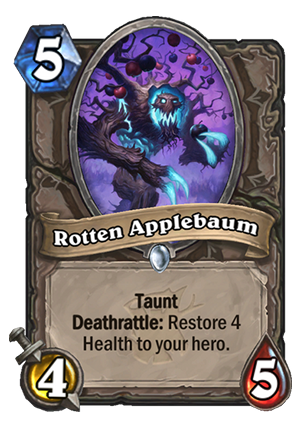 Rotten Applebaum is a 5 Mana Cost Common Neutral Minion card from the The Witchwood set!

It’s solid, I guess? Rotten Applebaum doesn’t look like anything impressive, but it’s not good to underestimate the Neutral Taunt/healing cards.

This is a bit like a mix between Sludge Belcher and Antique Healbot. It has a better initial body than the Belcher, and Taunt, but instead of spawning a 1/2 Taunt on Death, it heals you for 4.

It’s definitely not a good choice with classes that have access to lots of defensive tools already – e.g. Warrior or Priest might not want to run it. But at the same time, the classes that are low on Taunts/Healing/defensive plays in general might want to use it. For example, I could see Warlock or Rogue playing it. Especially since Mistress of Mixtures rotates out and Warlocks might be looking for some more healing. As for Rogue, if some kind of slower Rogue decks pops out, it might be their defensive card of choice. It’s probably a bit weaker than Prince Valanar, but at the same time, it doesn’t restrict you in terms of deck building.

Probably the only downside is that the healing is tied to the Deathrattle, not Battlecry… Which means that this card is super vulnerable to Silence against Aggro decks – not only it gets rid of the Taunt, but also the healing.

It would also have insane synergy with N'Zoth, The Corruptor, but that one is rotating out. Still, I could see using it in the Wild (in N’Zoth decks) instead of Sludge Belcher in decks that need healing more than Taunt.

There’s not much more to say about it, but I like it. It’s above average. I would be surprised if it wouldn’t see any play, to be honest.