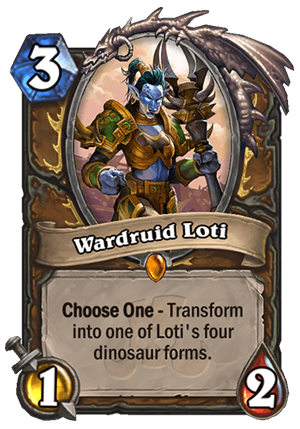 Choose One - Transform into one of Loti's four dinosaur forms.

To check out Wardruid Loti in action, check out this video:

It’s the first card with FOUR different forms, which means that is beats just about anything else in terms of flexibility.

You’re playing against Aggro and you need a Taunt? 1/6 Taunt for 3 isn’t best, but it does its job, especially against Odd Paladin.

You’re playing against a slower decks and you’re just before Turn 8, when they will probably drop The Lich King? Play Stealth + Poisonous and wait for it. You can stop him from playing a big minion, or force him to AoE it down.

Your opponent has just dropped a 3-4 health minion that you absolutely want to clear? You got 4/2 with Rush to run into it.

You’re holding Swipe but your opponent has a lot of 2 health targets (or a single 5 health target)? Go for +1 Spell Damage.

While yes, the individual forms aren’t most amazing, the flexibility is what makes this card quite powerful. Powerful enough to see play? Honestly, right now maybe not. Druid has so many overpowered cards that something like this feels underwhelming in comparison. It also wouldn’t be played in any Oaken Summons or Witching Hour deck for obvious reasons. But it would be a great fit into a sort of Spiteful deck (Spell Damage would be useless there, but other 3 forms not), or just a general Midrange Druid build. I could even see it in Malygos Druid and such after rotation happens.

Card rating: 7/10, but Druid has so many broken cards right now that it will be hard to fit until the rotation