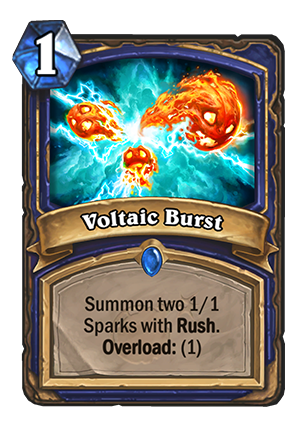 Voltaic Burst is a 1 Mana Cost Rare Shaman Spell card from the The Boomsday Project set!

I feel like people are underrating this card a bit. While summoning 2x 1/1 for 2 mana in total (not exactly, 1+1 overload is generally better than 2 mana) is pretty bad, if you consider the fact that they have Rush and that Shaman has lots of Token synergies, then it suddenly might look much better. Normally, lots of times those 1/1’s wouldn’t stack, because your opponent would kill them to play around exactly those synergies.

But with Rush, it’s a different story. Just for example – if you have Flametongue Totem on the board, then you get 2x 3/1 instead of 2x 1/1 to trade with. You can play them on your Bloodlust turn to trade for 8 extra damage, or just push through a Taunt. They have synergy with Knife Juggler, Sea Giant and such. It also combos really well with the new Thunderhead guy, summoning four tokens with Rush.

So yeah, this card is 2 damage for 2 mana, but that’s only the worst case scenario. If you play it in a Token Shaman deck, you will nearly always get more, sometimes much more. I like it and while it alone won’t be enough to push Token Shaman, add some more synergies and it might be a solid deck.