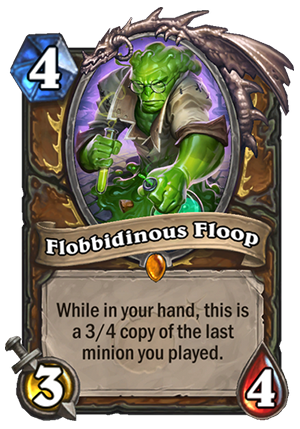 Flobbidinous Floop is a 4 Mana Cost Legendary Druid Minion card from the The Boomsday Project set!

While in your hand, this is a 3/4 copy of the last minion you played.

Of all the scientists, he has the most knowledge (when measured in volume).
Tweet

This. Card. Is. Insane. It seriously is. I mean, it will honestly be bad in lots of the Druid builds, but the combo potential behind it is just massive. What is important and I think some people aren’t reading into correctly is “last minion you played”. It’s not “you played this turn” or anything – if you play a minion one turn, then it sticks as its copy for the next turn. It takes what would be an okay card to another level, assuring its place in any deck built around some kind of combo.

Let’s start with the most obvious case – Malygos Druid. In your average game, it can act as an extra, 4 mana Faceless Manipulator. You play Maly, hit with your Twig of the World Tree to regain all of the mana, drop this, maybe another Faceless and shoot those Swipes and Moonfires. But, things rarely look so perfect. Let’s say that your Twig is destroyed, or you didn’t draw it, or you just drew it and have no time to go through all of the charges, because you will die before that. With this card in your hand, you can just drop your Malygos. If it sticks, that’s great, you probably win the game. But if it dies (more common scenario), next turn you can drop a 4 mana copy of it and either Faceless it + shoot 2x 11 damage Moonfire, or just drop Swipe (9 damage + 6 AoE) and 2x 6 damage Moonfire. Either way, you have 20+ damage combo even after BOTH your Twig and your Malygos get countered. That’s one of the best backup plans you can have.

Maybe another deck, then? Taunt Druid. When you drop Hadronox and it turns out that your opponent has Hex, Polymorph or even Silence to answer it, it sucks, slows you down a lot or even means that you’ve lost the game. Not with Floop. Hadronox was the last minion you played? You just drop it next turn and immediately Carnivorous Cube it. Heck, for maximum absurdness, if you played on-curve Master Oakheart, you can use it to play it again the next turn if somehow it was answered and you still have at least that second Dragonhatcher in your deck. That said, he also has some anti-synergy with Oakheart, since he can get recruited. It’s still not that bad, because when you drop Oakheart you pretty much win the game anyway, and it would only be 1 in 4 in the current list.

You can even use it in Big Druid to just get another copy of your big guy. A 4 mana 3/4 The Lich King ain’t bad at all. In the ideal scenario, you can even try using Carnivorous Cube – I’d assume that the two guys you will get back will have full stats and not 3/4. And I won’t even start talking about its potential in the Wild format.

So, not onto the downsides. Since it’s a 4-drop, it messes up with your Oaken Summons. The truth is, it’s still not a terrible pull – 4 mana 3/4 + 6 Armor would be see lots of play. However, the thing is that you DON’T want to pull it onto the board, since you want to use it for your combos. I mean, Malygos Druid builds have already dropped Oaken Summons, so it’s not that big of a deal in that deck, but in Taunt Druid, having to get rid of one of the better cards in your deck does suck.

It’s not a card that will universally fit into every deck, but it’s basically nuts in the right deck. I really think that it might lead to lots of broken combos and some of the cards around it, or itself, will be nerfed/hall of famed. Druid is already in a great position, with a few different viable decks, and this will just push some of the strategies even further. It WILL break something. It’s the first card I’m rating 10/10 in a long while.