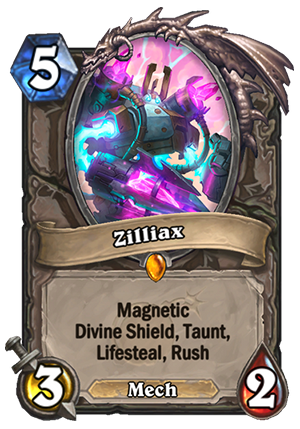 Zilliax is a 5 Mana Cost Legendary Neutral Minion Mech card from the The Boomsday Project set!

Everything but the kitchen sink. Oh wait, there's one on his back.
Tweet

Very hard to rate, but also incredibly interesting. It’s like a Chillblade Champion on steroids (you pay 1 mana for Taunt, Divine Shield and a Mech tag with Magnetize, but it has Rush instead of Charge – which honestly is not that big of a deal, since most of the time you want to trade because of the Divine Shield anyway), or a mini-Al'Akir the Windlord given how many keywords it does have.

I’ve mentioned before that both of the options (standalone card and Magnetize) need to be at least okay by themselves in order to see play in Constructed, thanks to the added flexibility. And this card seems to pass that test. By itself, it’s a 3/2 minion with Divine Shield, Lifesteal, Rush and Taunt. Which means that you can play it, clear some small minion (like a 2/3 or 3/3), get some healing and force an answer. It will often be a 2 for 1 which also heals you.

If Deathstalker Rexxar has taught me anything, then Lifesteal and Rush is a powerful combination in lots of matchups. Having the ability to immediately heal and still leave a minion that can heal you further on the board is massive. After the initial heal, your opponent still has to deal with it if he doesn’t want you to heal more. Silence is the best option, but not always available. Given that it has Taunt, it can’t just be ignored. It will often eat another removal, or possibly a minion trade and thus heal again. So I’d say that it’s okay card to drop by itself, even if you don’t Magnetize. It’s not amazing, but there are situations in which it will be a good T5 play even without a Mech on the board.

But the Magnetize part is the biggest selling point of this card. Imagine a 5 mana spell which would read “Give a minion +3/+2, Divine Shield, Lifesteal, Rush and Taunt”. It would be nuts. This one works only on Mechs, since it’s Magnetize, but if you play a Mech deck, then it’s not a big deal anyway. If you have even a mid-sized Mech body on the board already (and if you play a Mech deck, you should often have one), you can buff it, give it a free trade thanks to the Divine Shield, heal yourself up and then end up with a big Taunt on the board.

Thanks to the Rush part, it’s also perfectly viable to play a mid-range Mech and Magnetize Zilliax into it immediately, because it will gain Rush. Normally that kind of combo is too slow, because you can’t do anything immediately. But let’s even say that a 7 mana Upgradeable Framebot + this guy is a 4/7 minion with Lifesteal, Rush, Divine Shield and Taunt. It immediately heals for 4, takes no damage from the trade and then leaves a 4/7 Taunt with Lifesteal behind. That can be an immediate win in some aggressive matchups, and it’s not even that hard to pull off.

While Silence and single target removals would still be good against it, no matter what you buff, you can always guarantee some initial value. So even if the Magnetized buff gets Silenced after you already killed something, well, at least it wasn’t useless.

On top of everything, it’s a massive Corpsetaker activator if you’d want to play Corpsetakers in your Mech deck. Honestly, I don’t think that it would go into a non-Mech deck just to buff the Corpsetaker, but then again, people have played Stormwatcher just to give it Windfury, so that’s that. Still, the only deck running Corpsetaker right now is Even Shaman, and Even Shaman can’t run this one. But the synergy is there if you want to try it out. It also synergizes with Countess Ashmore for what it’s worth, a card that I suspect might see more play in the Boomsday or third expansion of the Standard year (because there will be more good cards to pull out with her).

So all in all, I think that this will be a great card in Midrange and slower Mech decks. Playable by itself (only okay, but that should be enough) and a great Magnetic buff. It has multiple synergies with other cards too. If Mechs will go full Aggro, though, I think that it will be too slow and clunky. Lifesteal is a big part of this card in slower decks, but not as useful in Aggro. Outside of Mech decks, it might also see some play in non-Even Corpsetaker deck, if that thing will exist. Oh, and maybe Rush Warrior? Even without Mechs, it might be okay thanks to the Rush synergies of the deck. But the deck would need some more support first.

P.S. In the Wild format, you can do some crazy combos with this card. Since it’s possible to play Glinda Crowskin + 5x Mechwarper on the same turn, you can make this card free, while giving it Echo. Then you can buff your Mechs as many times you can, which results in basically a full board clear (because you give all of them Rush and lots of stats) and a MASSIVE board. While Glinda + Mechwarpers was a combo already, there was really no way to abuse it to that extent, since you would run out of board space very quickly. But with buffs, you should be able to buff all of your Mechs twice or even three times before your turn timer runs out, creating a board that is impossible to clear without a massive AoE such as Twisting Nether, Psychic Scream etc. Of course, you can do the same thing with other Magnetize mechs, but the fact that this will heal you to full and clear the board + put Divine Shield and Taunt on everything likely makes it the best candidate. 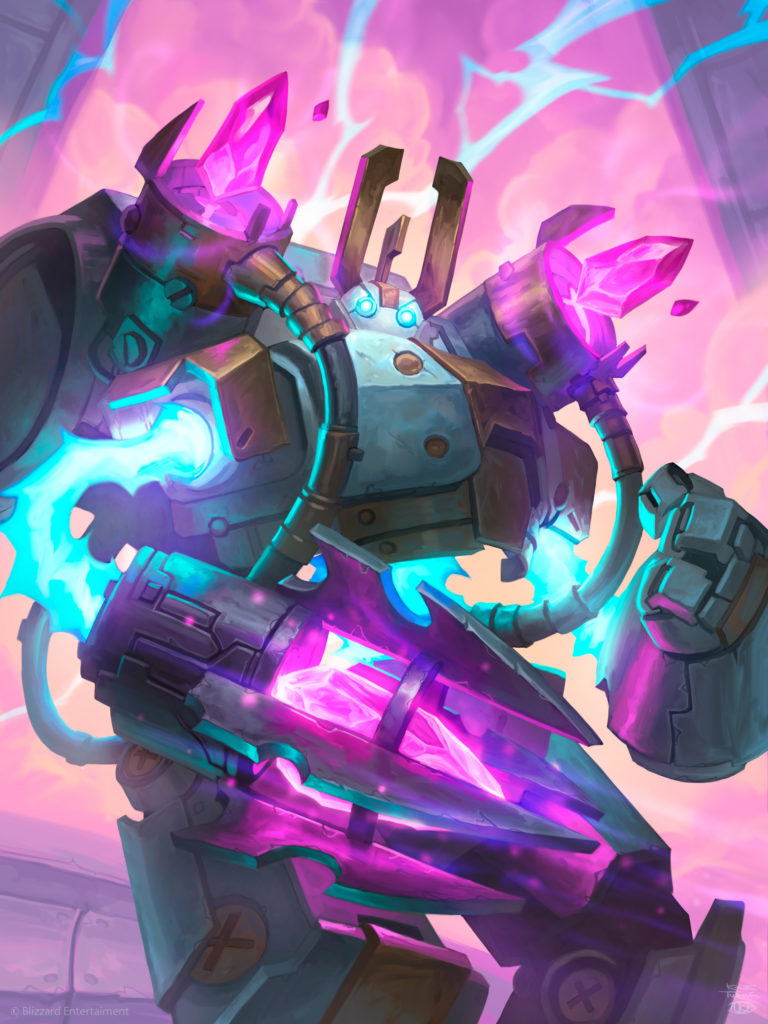