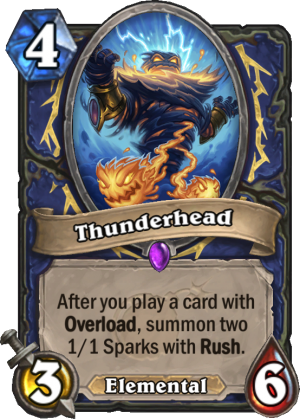 Thunderhead is a 4 Mana Cost Epic Shaman Minion Elemental card from the The Boomsday Project set!

After you play a card with Overload, summon two 1/1 Sparks with Rush.

It seems like instead of trying to push new strategies for Shaman, they’re now trying to get the class back to its roots – flooding the board and finishing the game with Bloodlust. This card simply looks good. I already rated Voltaic Burst pretty well, and this is one of the reasons why it might be strong. 3/5 for 4 is not good by itself, but you could say the same thing about Violet Teacher in Druid. And unlike Violet Teacher, this card is already great after just a single trigger. Not only it summons two 1/1’s, but they have Rush, which can make some amazing tempo pushes, especially in the late game.

It works best if yo can combo it with cheap Overload cards – Zap!, Voltaic Burst or Lightning Bolt are the best options right now. In the mid game, even without other synergy cards this can provide a massive board swings. But that’s not all – it also has some insane late game scaling. If you can spend extra 2 mana to play Knife Juggler or Flametongue Totem before that, then you’re set. Flametongue Totem in particular seems really amazing proactive board clear – you deal with everything your opponent has and end up with a solid board he absolutely has to answer in fear of Bloodlust.

It also has an Elemental tag, but I don’t believe that it’s really relevant. You would rather put it into a more classic Midrange build than into an Elemental deck. Maybe Even Shaman, but the deck would need another cheap (0 or 2 mana) Overload card, or maybe two, because Zap alone doesn’t seem enough. And the most important thing is that you DON’T build a full Overload deck around it. Those are bad. But this card doesn’t need one – just a few already solid Overload cards will do, because like I’ve mentioned before, even triggering it once already makes it worth it. I really like it, and I will definitely try to test out the Midrange/Token strategy.