The main talk of the town in Ashes of Outland has of course been Demon Hunter, and there have been plenty of Demon Hunter cards to talk about with the likes of Skull of Gul'dan, Priestess of Fury, and Altruis the Outcast receiving tons of attention. The set also has lots of great cards for other classes, and cards such as Soul Mirror, Scavenger's Ingenuity, and Mo'arg Artificer deserve all the praise they get.

Yet, there are also several well-performing cards that do not quite get the attention they might deserve. In this article, I will take a look at these unsung heroes of Ashes of Outland who work in the shadows, silently making the decks they are used in better. There are also some cards from previous expansions that are doing good work now that do not get much attention. Perhaps some of these covert operatives can help to improve your next deck! 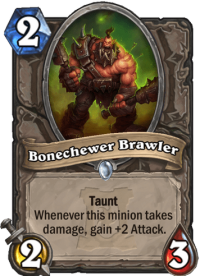 Bonechewer Brawler could have had more hype around it had it been released in any other expansion. Even the good old Amani Berserker is still borderline playable, and Bonechewer Brawler is superior to that card in many ways: it has Taunt and there is no limit to how much attack it can gain. It can be downright intimidating!

Demon Hunters can struggle to remove it early and Warriors don’t want to hit into it with Ancharrr or Livewire Lance. Overall, Bonechewer Brawler is one of the strongest two-drops in the game at the moment and it is a Neutral card so you can put it in any deck.

It has mostly found a home in midrange Highlander decks, but running it as two copies is not out the question either: I actually used two copies in the Midrange Hunter deck that I played to Legend in early May, targeting Demon Hunters and Warriors that were popular at the time. 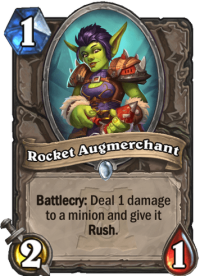 The Augmerchants remind me of Lackeys in many ways: seemingly weak one-mana minions that can swing games in surprising ways: not really one-drops but rather something you weave into your later turns to make them much stronger. Guardian Augmerchant has already started to gain some fame as the Divine Shield it gives a minion can enable great value trades. The next in line in performance is Rocket Augmerchant that can do a similar thing by giving a minion Rush to enable an immediate effect on the board.

With the nerf to Crimson Sigil Runner, Guardian Augmerchant has been one of the cards that has been attempted in its place, for example in this fairly popular Demon Hunter deck:

Another archetype where Guardian Augmerchant has found success in is Highlander Hunter:

Guardian Augmerchant also does a phenomenal job in Totem Shaman, but I’m afraid Totem Shaman would need more than that to become great:

Both Guardian Augmerchant and Rocket Augmerchant come together in some Zoo decks, although I’m not sure whether Zoo can really recover from the Imprisoned Scrap Imp nerf: 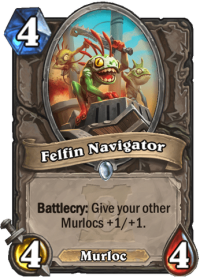 Felfin Navigator was added to Battlegrounds in addition to the regular game mode, and perhaps that made it look like it was primarily meant for that mode. However, the card has proven to be extremely strong. 4/4 is not a bad statline, and anything that buffs the health of Murlocs is a most welcome addition. Felfin Navigator has taken its place among the top cards in any Murloc deck and it is a significant addition to the tribe.

Murloc Paladin is the most solid Murloc deck right now and the recommended variant to play if you want to climb. Murlocs are also used in other classes, such as Shaman, Warlock, and even Demon Hunter, but no reliable lists have been built for anything else than Paladin so far. 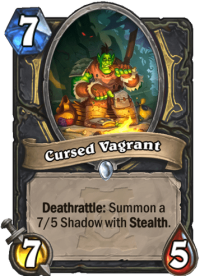 Cursed Vagrant has received very little attention despite how insane stats it can get on the board. You kill the main body, and it comes back even better! It’s what happens when someone loves Ravenholdt Assassin so much that they want to put another Ravenholdt Assassin inside it for the same price!

Sure, Cursed Vagrant is a seven-mana card that does not do anything immediately, so it can sometimes be awkward to play. However, seven mana is still a reasonable spot to play something passive if the payoff is big enough. Slow decks often have nothing that can deal with the Vagrant, so if you’ve managed to chip in enough damage before you play it, it can be game-ending.

However, you don’t even need to cheat the Cursed Vagrant on the board for it to be good. I used the card as my main win condition on my budget Legend climb in Galakrond Rogue: playing it for seven mana is often OK, and getting a free copy from Galakrond is even better. 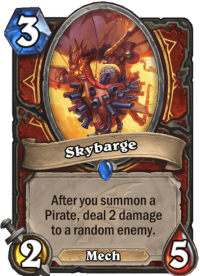 Skybarge is an older card from Descent of Dragons. It has recently started to find some fame as people have been looking for alternative Warrior decks after the nerfs.

There were already plenty of statistics available on Skybarge thanks to the free new player deck that includes the card, and the new rise of Pirate Warrior could have been predicted based on that deck already being Legend-capable. Now, mainstream Pirate Warriors are finally here.

Pirate Warrior is seeing a lot more experimentation and when it gets going early in the game, it can be nigh unstoppable. This recent list from Dekkster can serve you well on the ladder: 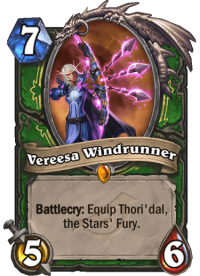 Remember Vereesa Windrunner, the Hunter Legendary minion from Rise of Shadows? Don’t worry, no one else does either. However, Vereesa is one of those rare Legendary cards that have never seen mainstream play and yet are no memes either. If you happen to open it in a pack, you can and probably should use it.

Vereesa is just such a joy to play with. Rapid Fire becomes Rapid Fireball that deals six damage for two mana. Arcane Shot blasts for four damage. Life is simply better if you Vereesa.

The dedicated Hunter player Sidisi has kept making Vereesa decks over multiple expansions, and his take of Vereesa Highlander Hunter in Ashes of Outland looks like this:

Vereesa can also slot into other archetypes, such as Dragon Hunter: 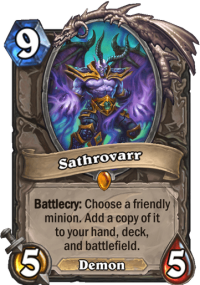 The latest patch slowed the game down a bit, and that means that decks can afford to use some late-game win conditions. Sathrovarr is a bit older free Legendary card that is still given to everyone, and it has some excellent interactions with some of the cards in the current Standard format.

The most common deck you can see Sathrovarr in is Quest Warlock without Malygos, but that deck is mostly inferior to the more popular Malygos variant. Sathrovarr and Kanrethad Ebonlocke do make a sweet pair that can allow you to resurrect a board of big demons multiple times, but with no armor available for the class, the threat of a one-turn-kill against the likes of Malygos Quest Warlock holds it back a little.

However, Sathrovarr can do more than that in the current meta. It has found its perfect complement in Quest Druid with Archspore Msshi'fn and Ysera, Unleashed. In practice, there is always a target for Sathrovarr in the deck: either one of the two main targets lives a turn because they are not very intimidating by themselves, the Prime survives a turn because it is not easy to remove, or even in the worst-case scenario, some random Dragon is summoned at the start of your turn that can be targeted by Sathrovarr.

Who Are Your Unsung Heroes?

I came up with the idea for this article while I was casually browsing through some performance statistics, and noticed that some cards were seeing only a little play, but seemed to be in decks that performed well and the cards themselves also performed well within those decks. From there, I started to look for other cards with similar characteristics.

Perhaps unsurprisingly, many of these unsung heroes have featured prominently in my budget decks: they are good cards that do not see a lot of play for various reasons but have a much easier time finding a slot in budget decks. Sometimes they are simply underestimated, and sometimes there is another variant of the deck without the card that is a tiny bit better, and therefore hogs all the playtime.

Then there is Sathrovarr, which is a bit of a special case. You cannot find many statistics on Sathrovarr anywhere. I started using it because my Quest Druid deck needed to solve a very specific problem, lack of value in the slowest matchups, and I wanted a solution that takes only a slot or two from the deck so that I can still defend against aggro. Sathrovarr turned out to be a fully tailored solution to that problem for that specific deck.

What we can maybe learn from this is that there are lots of things to discover in Hearthstone. Some answers are already there in the data, just waiting for someone to dig through the numbers to see them. Some answers lie within the cards themselves, used too little to even provide data to go through.

Have you found any unsung heroes for the current Ashes of Outland meta? Where do they shine? Let me know in the comments!