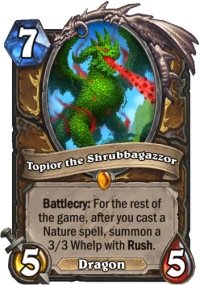 It has been a wild ride. Day one was dominated by Ramp Druid. Turns out, Topior the Shrubbagazzor followed up by tokens and then Brann Bronzebeard and Kael'thas Sinstrider can break through any defense. Imp Warlock is one answer to Druid, and it started rising immediately.

On the other hand, Skeleton Mage loses hard to Druid but has a good chance against Imp Warlock.

On a superficial level, this triangle forms the central part of the meta. Warlock beats Druid. Mage beats Warlock. Druid beats Mage. However, there is more than meets the eye in this meta, and the full story is far from over!

Let’s take a closer look at the three meta tyrants and the up-and-coming challengers!

Imp Warlock is a deck that almost builds itself. Put a lot of Imps into your deck. Use the new cards Impending Catastrophe, Vile Library, and Imp King Rafaam – all of which are nuts by the way – and you’re almost done! Almost. That’s where the real work begins.

This is currently the best-performing Imp Warlock deck:

Sea Giant and Grimoire of Sacrifice are particularly useful in the mirror, which you can expect to play a lot. Sea Giant has uses in other matchups as well, but Grimoire is simply an anti-mirror tech card. 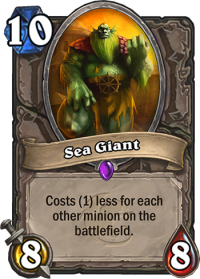 Smothering Starfish is great against Shaman, but it is uncertain whether such a tech card actually deserves a place in the deck. Probably not. Shadowblade Slinger also looks weak and unlikely to stay in the deck in the long run.

But what options do you have? Piggyback Imp has been disappointing. Blademaster Okani does not seem to belong to this archetype. Dreadlich Tamsin is one of the more interesting options despite some anti-synergy with your token strategy.

The final slots in the deck are likely to keep changing throughout the expansion as various tech cards are introduced to fight against whatever the current meta is.

There has also been a different approach to Imp Warlock.

Curse Imp Warlock attempts to combine Imps and their aggression and card draw with Abyssal Curses. It is a bit of a weird hybrid, as there are several anti-synergies between the curse cards and Dreadlich Tamsin and the Imps. But it is the result that counts, right? This hybrid successfully turns the tables on Skeleton Mage. Suddenly, Skeleton Mage is a favored matchup for Imps! It also keeps wrecking Druid. So life seems pretty good, right? Unfortunately, by making Imp Warlock slower and increasing its endurance, the deck has forfeited the mirror matchup. A pure Imp Warlock deck takes the mirror match most of the time. One step forward, and one step back, I guess.

What Curse Imp Warlock shows is that the archetype has flexibility. You can build things on top of the around 20-card Imp core. Not a lot of things, but some things. This means that Imp Warlock will be impossible to drive away regardless of the meta. In one form or another, it is here to stay.

Ramp Druid has one problem. Imp Warlock. If it were not for those meddling Imps, Ramp Druid would be having a great time. Sure, other decks are trying to tech in Theotar, the Mad Duke to steal Sire Denathrius. Sometimes they succeed, most of the time they don’t. It is an inconvenience at most, and you can just tech in your own Theotar if it starts to get to you. But those Imps. Ramp Druid has no answer to them. With a 30-70 matchup that is more than 30% of the meta, it is a small miracle that Ramp Druid’s overall win rate is still above 50%. It is truly a testament to the sheer power of Druid.

This is also what ensures that Druid is here to stay. When people try to counter Imp Warlock by playing more defensive decks, Druid is right there. Demolishing any hope for slower decks.

If I wanted to play Ramp Druid right now, I would play this list:

Looking through statistics, this seems to be the best list so far. 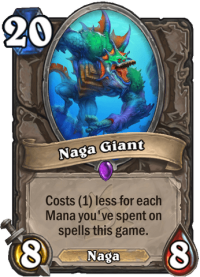 Naga Giants are too important to cut. You do not need a Battleground Battlemaster to go with them, as those big beefy minions are still really good at ending games even without Windfury.

Theotar, the Mad Duke gives you a way to grab your Sire Denathrius back if it is stolen, or just grab an extra copy from the opponent. Smothering Starfish can help your minions free themselves from freezes to push more damage or to trade.

Finally, there is always Brann Bronzebeard and Sire Denathrius to end any game that goes long.

The Deathrattle package in Ramp Druid has not succeeded in the same way. It cannot turn things around against Imp Warlock, and it is weaker against many midrange decks too. You are just giving the opponent more time to win the game by going with Deathrattles over tokens.

Skeleton Mage has a lot of options when it comes to the exact build. 30 cards or 40 cards? Kel'Thuzad, the Inevitable together with Mordresh Fire Eye or with Sire Denathrius? Only Frost spells for Frostweave Dungeoneer or a variety of spell schools for Magister Dawngrasp and Multicaster?

The Skeleton package itself is highly synergistic, and you generally want to use all of them, if you use any. The lone exception is Nightcloak Sanctum which has been as good or even better than expected and goes into pretty much any Mage deck. It’s just really good.

As for the exact build of Skeleton Mage, there is still a lot of data to gather, but I really like the look of this one:

The Frost-only approach does not work. That is one of the few things we know by now. But why not do everything with a single XL-sized deck? Kel'Thuzad, the Inevitable, Mordresh Fire Eye, and Sire Denathrius can all fit into the same deck! There’s even room for Brann Bronzebeard and Kael'thas Sinstrider, which now have three payoff cards that they can be used with. 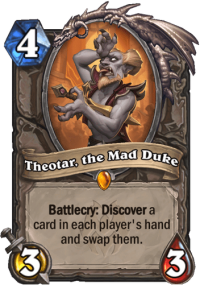 Theotar, the Mad Duke gives you a chance to steal Sire Denathrius and Solid Alibi is doing a good job of protecting your face from big minions.

This approach to Skeleton Mage is able to fight against Druids and Warlocks, and thereby threatens to break out of the triangle! While the meta may look clear from a bird’s-eye view, there is a lot more going on with the development of each archetype to counter their opponents when you delve into the details. There is also more to the meta than just the three main decks.

While the attention is on Warlock, Druid, and Mage, Hunter has been chilling and enjoying great win rates with many deck options. The old Hunter archetypes from Voyage to the Sunken City never left, and even Face Hunter has returned to the game now!

It is the basic modern Face Hunter game plan with sticky early-game minions and buffs. Wildseeds add more minions to the mix, and the final touch is Collateral Damage which is phenomenal against a Mage’s board of Volatile Skeletons. Face Hunter is able to take on both Druid and Mage. However, it fails to compete with Imp Warlock and also struggles to beat other Hunter decks.

This is not the old days when the faster Hunter deck always won. This Face Hunter has pressure, but not enough to overcome Prince Renathal Hunters. Midrange Hunter beats Face Hunter. We’re definitely not in Kansas anymore.

Beast Hunter keeps winning games, just like in Voyage to the Sunken City. Its refinement is only beginning, but this is a good starting point:

We already saw in Sunken City how hard it is to pinpoint the best Beast Hunter list. People change a card or two, or even four or six, while still keeping the main core the same, and all the variants are great. The deck just keeps developing overwhelming pressure and winning games. I’m sure there will be some good tech cards to include in the list as the meta becomes more stable, but the archetype is just strong.

As for Quest Hunter, well, it keeps doing its thing. Add Stag Charge and Wild Spirits, and you’re good to go for another expansion!

This is the most popular Quest Hunter deck in the West. In China, a slightly different list reached #1 Legend, but I don’t have any stats available about that one so I do not know if it is better than the above list or not.

Here it is, anyway, in case you want to give it a spin!

Blizzard chose to push Evolve Shaman as the main Shaman archetype in Castle Nathria. Yet again. They have been partially successful. Going all-in on the Evolve mechanic is OK, but it looks like Evolve Shaman lacks the biggest swing turns it has had in the previous expansions and consequently is not quite as strong. It is still comfortably over a 50% win rate. 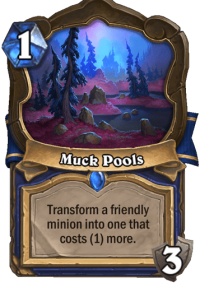 However, the superior approach seems to be taking some Evolve mechanics – Muck Pools, in particular – and adding them to Control Shaman, like this:

Muck Pools improves Goldshire Gnoll, Gorloc Ravager, and Famished Fool, and sometimes you can get a game-winning ten-drop on the board early from your Gnoll. But that is not the main game plan of the deck. It is still comfortable playing a longer game, defending against key minions with Theotar, the Mad Duke and Mutanus the Devourer and against wide boards with Snowfall Guardian and Brilliant Macaw.

The result is a rock-steady deck with no major weaknesses. It just might not win convincingly enough in its good matchups to become a top-tier deck. 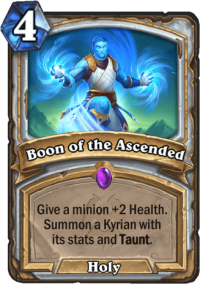 Naga Priest got some insane upgrades in Castle Nathria, especially Cathedral of Atonement and Boon of the Ascended. The deck also includes Pelagos and Partner in Crime, but the crazy part is that those might not even be necessary. Pelagos can win games on the spot in the early game, but, surprisingly, Partner in Crime does not perform nearly as well in fast archetypes. It has proven to be stronger in Quest Priest, just buying some time early in the game. Naga Priest wants to attack, and Partner in Crime is not ideal for that.

There are still many Naga Priest lists on the ladder that do not run Boon of the Ascended, and that card makes a huge difference. I’m genuinely worried about what weaknesses the good versions of the deck even have. Quest Priest is the only thing that comes to mind! Multiple Silence effects and multiple board clears can hurt this deck, but other than that, it is a juggernaut that tramples through everything.

Where is Everyone Else?

Demon Hunter, Rogue, Paladin, and Warrior have no archetypes that can reach over 50% win rates over large sample sizes at the moment. Rogue and Paladin both have some hope as there are individual Quest Rogue, Thief Rogue, Mine Rogue, Mech Paladin, and Holy Paladin lists that look promising. Nothing obviously strong, but candidates for over a 50% win rate at least. Demon Hunter and Warrior do not have much going for them. It looks like these four classes will not play a part at the very top of the meta before balance changes come to the rescue.

The corpse of Sire Denathrius has hardly grown cold yet. Murder at Castle Nathria is still fresh, and there will be twists and turns in the meta. Imp Warlock, Ramp Druid, and Skeleton Mage will no doubt be present throughout the expansion, or at least until the first balance changes. However, their trinity of domination is already under assault by Naga Priest. Hunter decks are also doing well and will not give up an inch. There is a lot of Hearthstone left to be played in Castle Nathria!