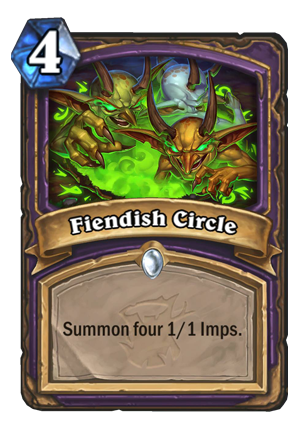 Fiendish Circle is a 4 Mana Cost Common Warlock Spell card from the The Witchwood set!

A balanced version of Imp-losion, but in this case “balanced” equals “bad”. Getting 4x 1/1 for 4 mana is not good. I mean, Paladin will laugh at you, play Call to Arms, get three stronger minions and probably throw knives at two of your 1/1’s too just for a good measure. Call in the Finishers, a Shaman’s version of this card, was played only twice – first in some sort of Token Shaman (but it was replaced pretty quickly by better options) and then in Quest Shaman, but in both cases, it was thanks to multiple synergies. Similarly, Stand Against Darkness didn’t see any play until the amount of synergies reached a critical level.

Realistically, the card has SOME synergy in Zoo. You can play it with Knife Juggler or with Dire Wolf Alpha. You also have cards that buff Demons (Demonfire, because Crystalweaver is rotating out), but that’s not good enough.

This is a much worse version of a Forbidden Ritual, which has seen some play in Warlock thanks to its flexibility, but disappeared once every deck started running some 1 damage AoE. The only advantage of this card is summoning Demons, but right now, there aren’t really lots of ways to take advantage of that.

If they print some powerful Demon synergies, especially AoE ones (like 2 mana “give all your Demons +2/+2” or stuff like that), it might see play. But right now, it doesn’t make much sense to play it.