In a historic development, Team 5 are actively trying to make a slow Paladin deck viable – while the class’ control archetype was one of the premiere decks during the Classic era, it slowly fell by the wayside and transformed into something faster. We’ve never had an expansion before Rastakhan’s Rumble that included more than one class card explicitly aimed at this kind of a deck – now we’ve got so many on offer that we’ve decided to discuss the standard control approach separately from the “Healadin” type – you can find our thoughts and decklists about that one here. 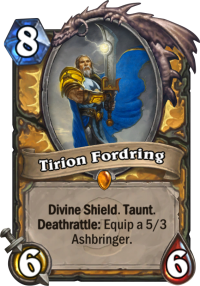 So, is it time to go to battle yet? The beauty of Control Paladin was always its ability to grind down basically anyone as the slow trickle of 1/1 Recruits eventually added up to a game-winning advantage in a slow match. While that strategy has lost a lot of its relevance over the years – you can find out more about that in this article –, there are quite a few star cards in the upcoming set that will likely make the archetype viable again. Of course, the most exciting addition here is Immortal Prelate, a card that can give you a potential Jade Idol-esque plan for the late-game, something which the class has always excelled at. Way back when, even cards like Elven Archer were good enough to include in a strong control deck, leading to builds like this that likely look fascinatingly weak to those who joined the game later on:

The class’ Classic set also leans towards a control-oriented approach, which usually pushed Uther and co. towards a more defensive strategy around the start of a new Hearthstone year – meaning the strong additions this time around could really make Control Paladin shine once the rotation occurs in early 2019. Still, the archetype faces stiff competition, even in terms of other viable Paladin decks: the Even and Odd builds are likely still going to remain strong, and dedicated Healadin constructs are also definitely worth exploring. However, it’s possible that the heal synergies aren’t as strong as they seem to be right now or that they will be too difficult to trigger in control matchups. Have no fear: it looks like “regular” Control Paladin decks will also be very much worth a look or two after the new expansion hits. We’ve listed four different variations for you to try, depending on what you’re facing on the ladder.

You’ll be able to find all of our pro and streamer lists on our Control Paladin Archetype Page!

If you don’t ever want to lose to a Warrior ever again, have no fear, we’ve got you covered. Two copies of Augmented Elekk ensure that you cannot possibly be out-greeded by anyone, and the presence of Bloodclaw and Doomsayer should give you a chance to shut down early aggression as well. From then on, the presence of Shrink Ray provides a great extra option to reduce incoming board damage alongside the usual suspects – and of course, they will be fairly helpful when it comes to discounting Shirvallah, the Tiger as well. Again, The Lich King takes precedence over Tirion Fordring in the featured build, especially because of its anti-synergy with Uther of the Ebon Blade. Gluttonous Ooze is definitely worth considering as an addition, though it’s tough to tell what you could cut: while the cycle effect seems fairly useful, Flash of Light could likely make room for the weapon removal tech.

While you can’t exactly guarantee a one-turn kill in the way Auctionmaster Beardo enabled way back when, Thijs actually had pretty good results with a similar Paladin deck in The Boomsday meta. Extra options to cycle and stall are pretty valuable with a strategy like this one, which is why Time Out! and Flash of Light found a home in this build. Consequently, Immortal Prelate doesn’t make the cut: the win condition here is very different. Not only do you lack any sort of synergy, you’d worsen Call to Arms (and potentially your future draws as well) if you were to shoehorn it into a deck alongside buff spells. Note that Giggling Inventor cost five mana at the time of Thijs’ heroics, which is why I’ve again opted to include Half-Time Scavenger to help a bit more against aggro.

It was certainly a tough decision to make, but there’s no way to fit the Corpsetaker package into this deck if you’re trying to pull off a dedicated Control strategy. The inclusion Immortal Prelates as key cards mean that Crystology all of a sudden becomes a premium card draw tool. Spirit of the Tiger is certainly worth experimenting with for stat generation purposes but there might ultimately be better fits for this kind of an archetype. Half-Time Scavenger’s Stealth is incredibly valuable here, and so is its armor-gaining potential against aggressive opponents. Since you still lack a dedicated finisher, Mojomaster Zihi can buy you a decent amount of time against combo decks – and its presence is why the curve still remains fairly low for this build. This is also part of the reason behind ditching Tirion Fordring for The Lich King, though it might be worth trying to include more Silence-worthy cards to stretch your opponent thin – your mileage may vary. As most of the usual early game is cut here, a Doomsayer is included to help against early aggression.

Then again, maybe you just don’t want to take the game that far into the distance. I get it, we’ve all got things to do. So how about something with just a little bit more explosive potential?

Cube Paladin was already a fairly viable option capable of hitting high Legend ranks: while Immortal Prelate may seem like the perfect fit – we’ve included them over Hydrologists –, this deck surprisingly lacks the multitude of buff spells the card would likely need for synergy purposes. An extra Dark Conviction is meant to help against the massive Taunts you could potentially run into in the Rumble.