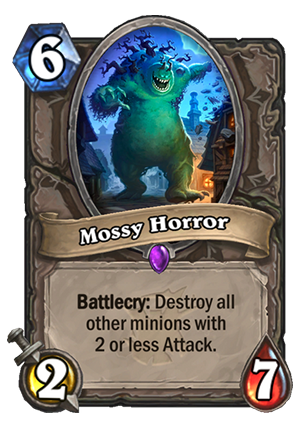 Mossy Horror is a 6 Mana Cost Epic Neutral Minion card from the The Witchwood set!

Battlecry: Destroy all other minions with 2 or less Attack.

The hills have eyes. And teeth. Pretty bad breath, too.
Tweet

This is a neutral Shadow Word: Horror on a stick. For 2 more mana, you get a 2/7 minion, which is actually quite good. For example, Book Wyrm was a 2 mana spell on a stick (Shadow Word: Pain) and you had to pay 4 mana for the 3/6 body. Which wasn’t that bad, to be fair, the card has seen a fair share of play. But this one is even better.

However, there are two problems with this card. Horror was often used on the curve to deal with Aggro boards – this one can’t do the same thing. Aggro Paladin plays Call to Arms and you just can’t wait two more turns to deal with it. Another problem is the lack of Pint-Size Potion. While SW: Horror was often decent even without it, the Pint-Size pushed it into the “great removal” range, as you could deal with anything up to 5 Attack, which is a huge difference.

That said, the fact that it’s neutral and that it can still counter lots of plays in the mid/late game, I think that it can be good. For example, Paladins can still play that Call to Arms past Turn 6. Druid can play Spreading Plague or Living Mana depending on the deck. It could also be good against some Control Warlock boards, with cards like Voidwalker (from Voidlord), Stonehill Defender etc. Can be used to hit those pesky Northshire Clerics and Radiant Elementals against Priest. It’s also great against Shaman, because it destroys all of the Totems, as well as some common minions (e.g. Fire Fly, Hot Spring Guardian).

This card will mostly be a meta call. If lots of board flood type of decks will be played, or cards that summon multiple 0-2 Attack minions will be popular, then this is going to be a great choice. If not, well, the answer is simple. I actually quite like this card, it’s not overpowered, but it can work very well in the right meta.

Oh, and it’s a good candidate to play in the Lady in White deck. The difference between 2/7 and 7/7 is huge. After Lady in White, it will be playable even if it doesn’t hit anything.

Card rating: My guess is 7/10, but it heavily depends on the amount of 2 or less Attack minions in the upcoming meta. 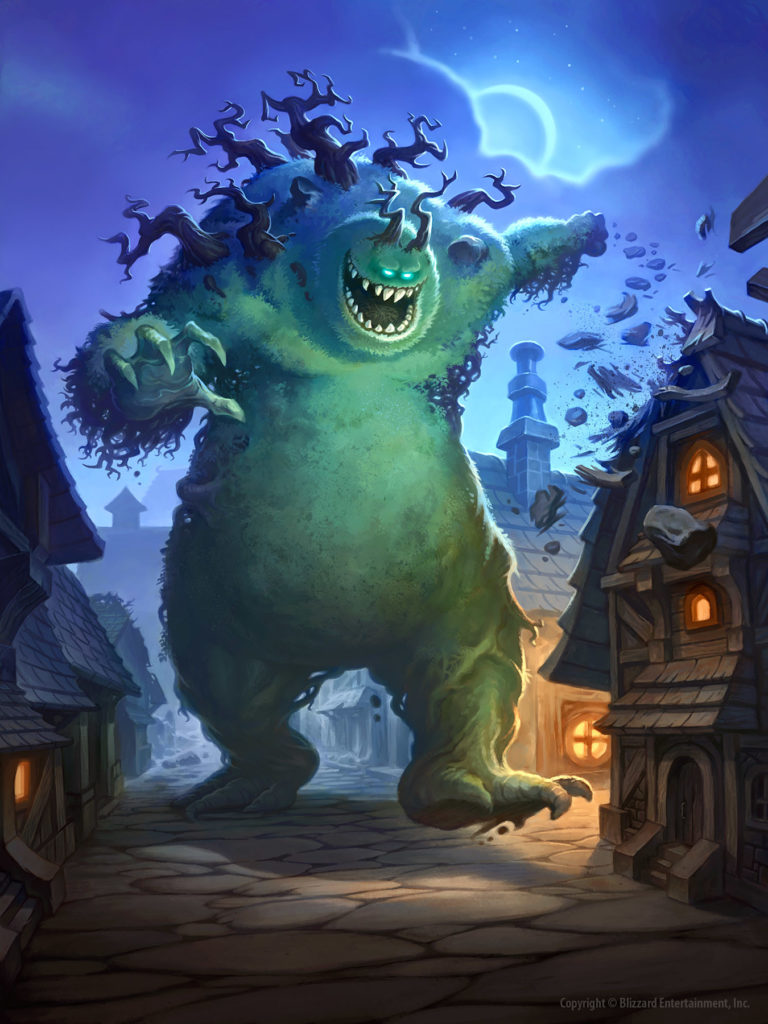