Our Rumble Run Guide will walk you through the ins-and-outs of this new single-player mode that will be apart of the Rastakhan’s Rumble expansion! Once this new mode is released, we will have tips, tricks, and strategies on how-to best get through some of those tricky bosses.

Like with every new expansion, there comes some new and exciting single-player content. While Blizzard changed things up by throwing puzzles at us in The Boomsday Project, it appears that they are returning to the style of Kobolds and Catacombs and The Witchwood roguelike adventures for us in Rastakhan’s Rumble. The great benefit of this style of play is that each time you load it up your experience will vary based on the cards you receive or the bosses you end up facing. This gives a longer lifespan to this type of content, unlike the Puzzle Labs which were pretty much one and done.

We have nine guides to help you throughout your Rumble Run. Each one features the cards you’ll be facing, and some tips and tricks on how-to defeat each of the mighty Troll champions! 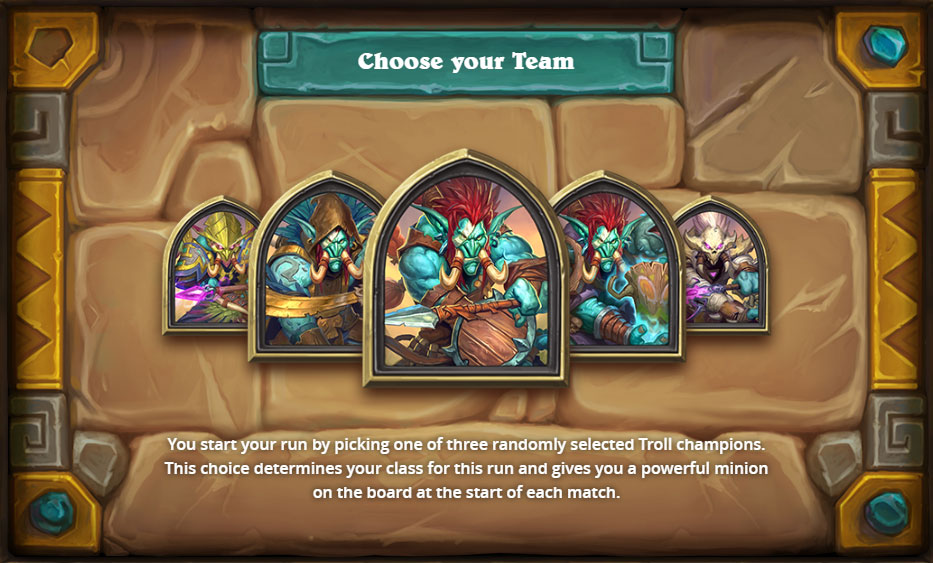 You start off as Rikkar, who is a young Troll champion, but he hasn’t pledged himself to a Loa/Team. You get to pick one of three randomly selected team options which will determine your class! These options are in the form of Shrines. Your starting Shrine will be on the board in the beginning of the game, and each class has three different Shrines!

Enter the arena as Rikkar, an up-and-coming troll contender wanting to prove his gladiatorial prowess against some of the greatest fighters in Azeroth. At the start of the Rumble Run, players will pledge their axe to a Loa—powerful animal gods worshipped by all trolls. This decision, which also determines a player’s class-based team, is made by choosing from a random group of three Shrines—homages by which Loa can be invoked in combat, providing powerful passive benefits. There are 27 Shrines in total—three for each Loa, each of which calls upon a different aspect of the animal god’s power.

Shrines are like Dungeon Run passives and are extremely powerful and live on the battlefield. As mentioned before, each class has three Shrines each, and these each have their own identity. This gives you the potential of 27 different options to play with and against!

As players fight their way through the Rumble Run, they’ll have to make tactical decisions to best their skilled opponents. If a Shrine is dealt enough damage, it will go dormant for three turns, during which its owner will lose the passive benefits. Taking down each opponent’s Shrine—while protecting your own—is an important key to victory, so choose your strategy carefully! 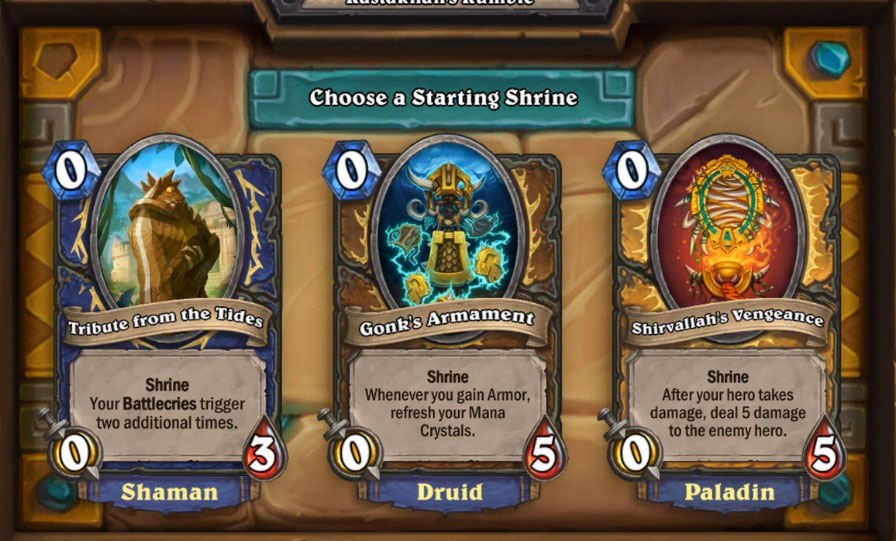 As mentioned above, your Shrine will start on the board each game. When a Shrine card is destroyed it goes dormant and stays on the board. It will resurrect after three turns.

Each class has three Shrines, here’s a full list for each class. 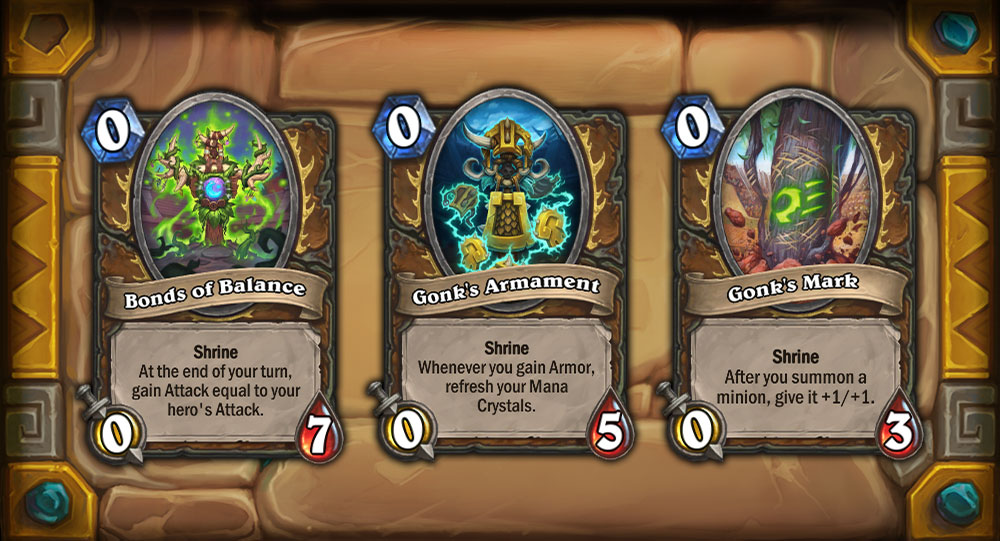 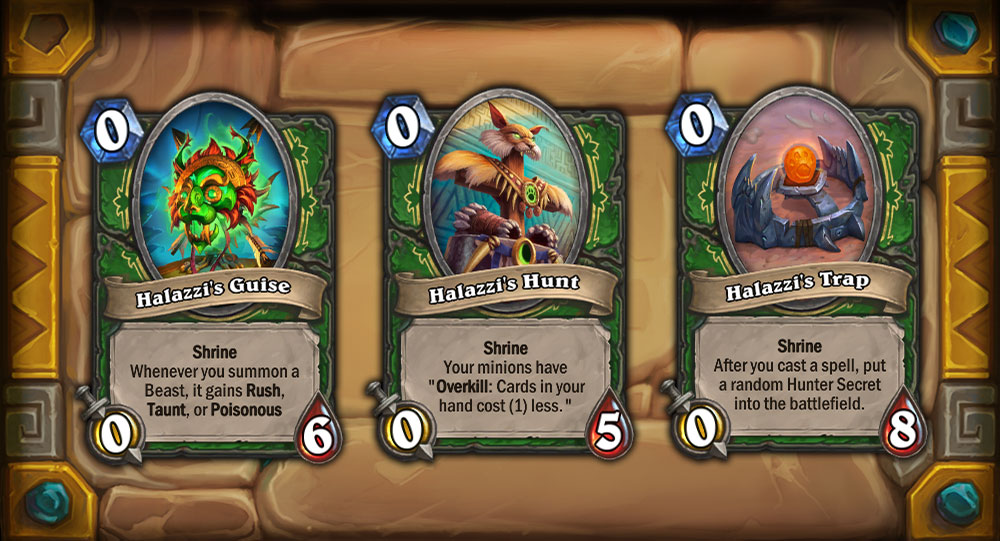 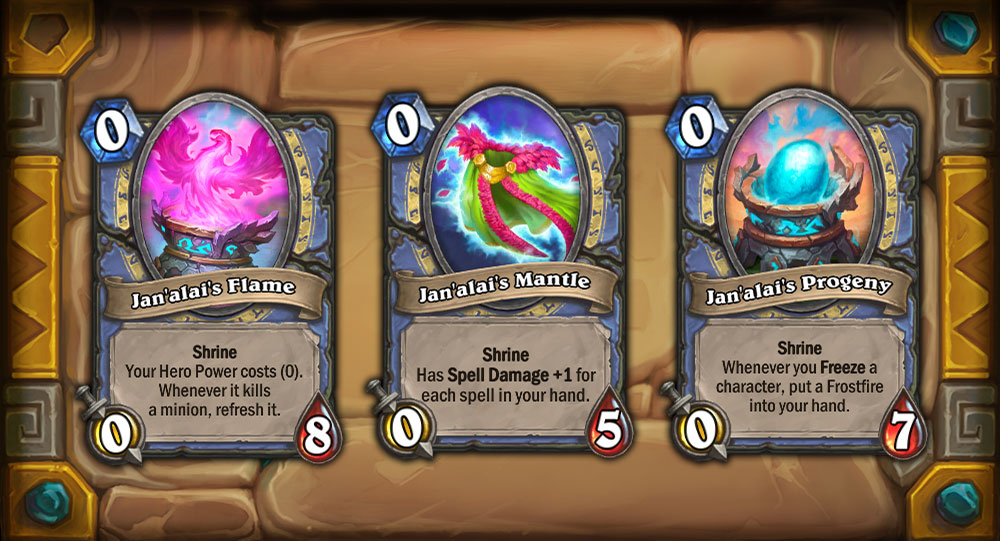 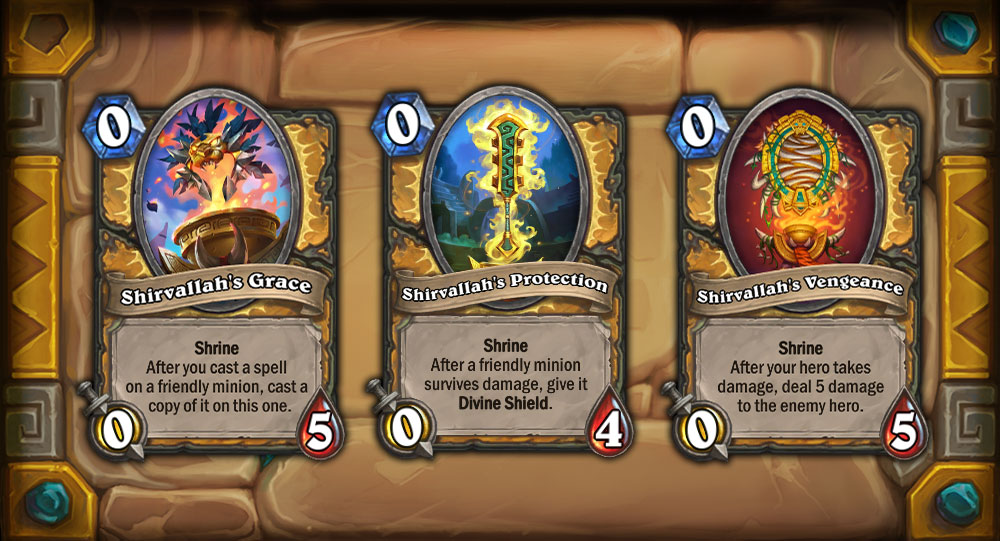 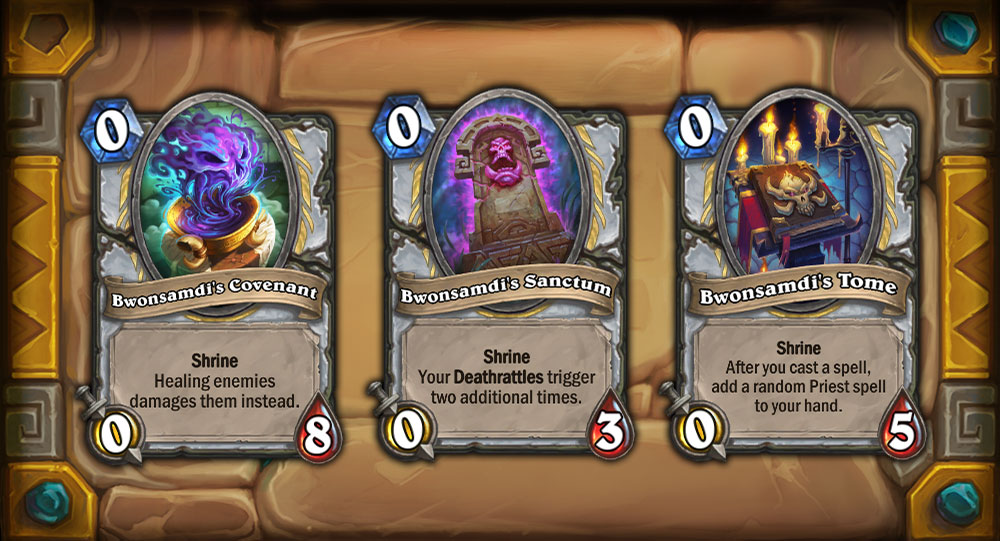 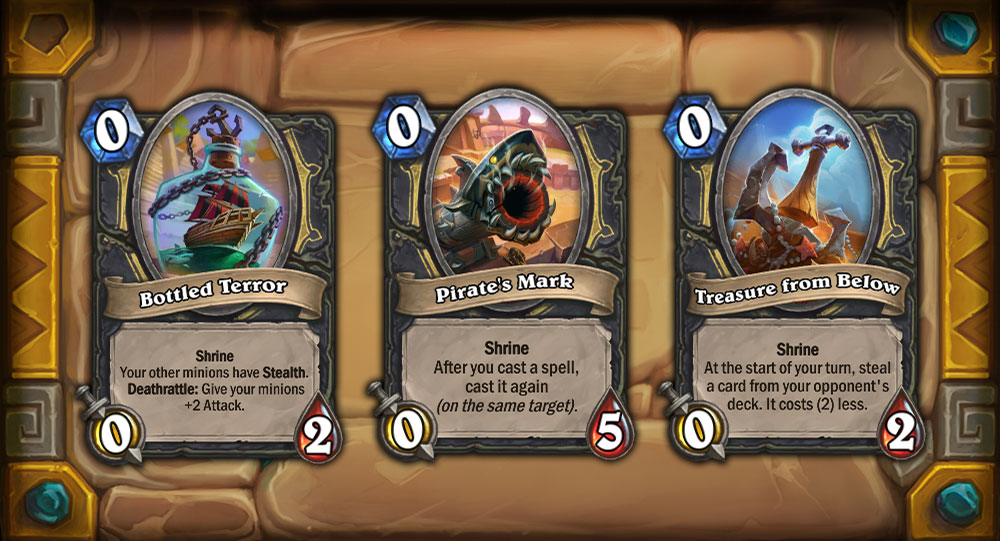 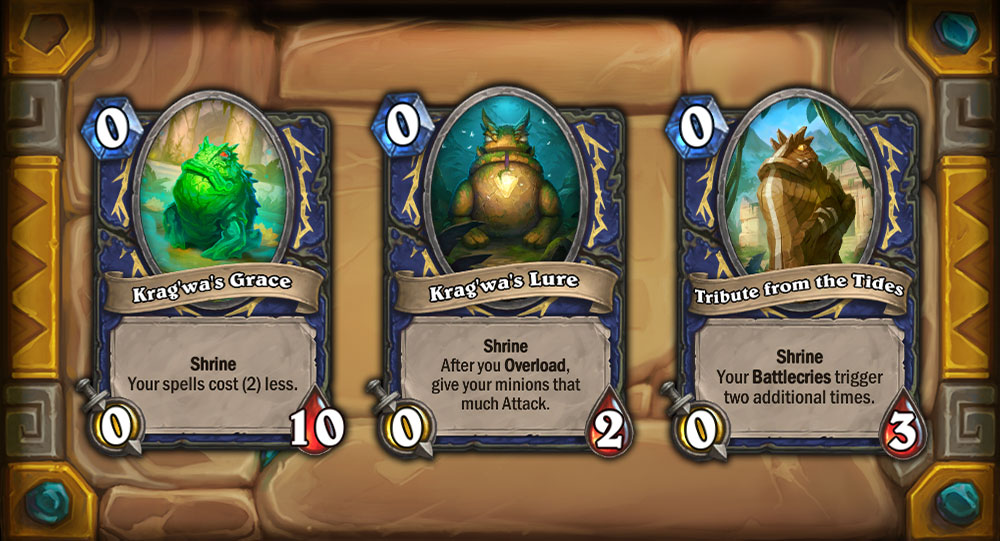 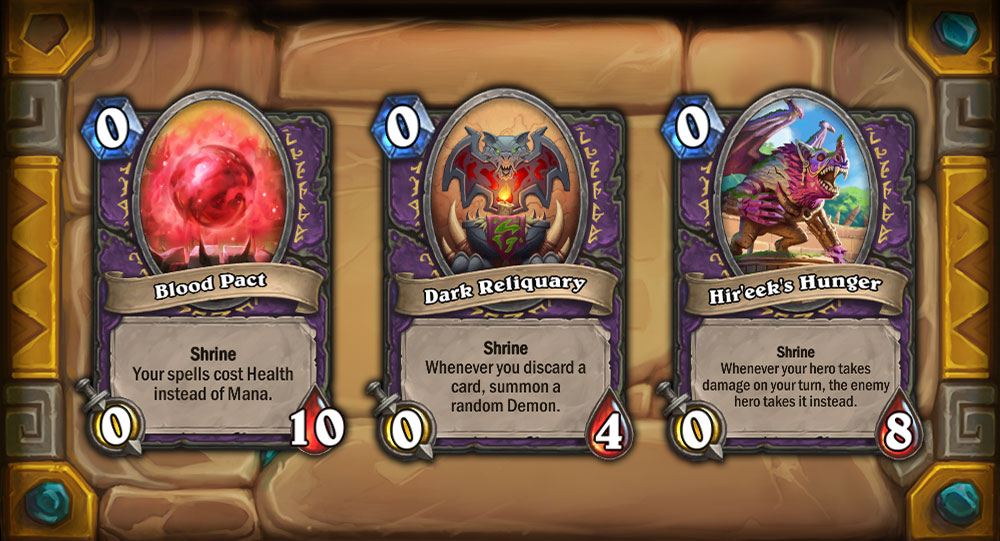 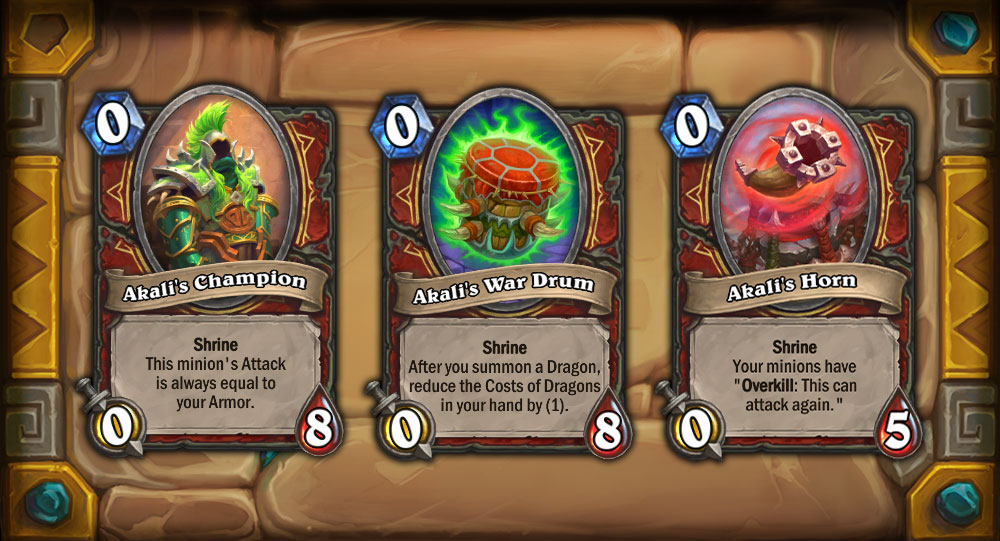 Advancing in the Rumble

As you advance through the Rumble and take down opponents you will be able to add new spells and minions to your deck! Each class gets its own specific “Prize-Fighter” minions. You will have to beat eight of the Troll contenders, one from each team other than the one you are representing!

Throughout the Rumble Run, players will collect the spoils of victory, including minions, spells, and Teammates—insanely strong minions exclusive to Rumble Run. There are six unique Teammates for each of the nine class-based teams, for a total of 54. Players will need all the strength they can muster to defeat eight other champions to claim the title—as well as the Rumble Runner card back—for themselves.

Each class has six Teammates you’ll be able to choose from as you make your way through the bosses. We’ve got a full list of the teammate options below!

As you progress in the Rumble you will get a chance to pick from Passives that will buff your Shrines at the beginning of the game. Here’s a full list of the Passives you’ll be able to choose from!

We’ll be adding a bunch of tips to help you complete the Rumble run and earn that card back!

If you are able to complete a full run with any class in Rumble Run you will receive the following card back! 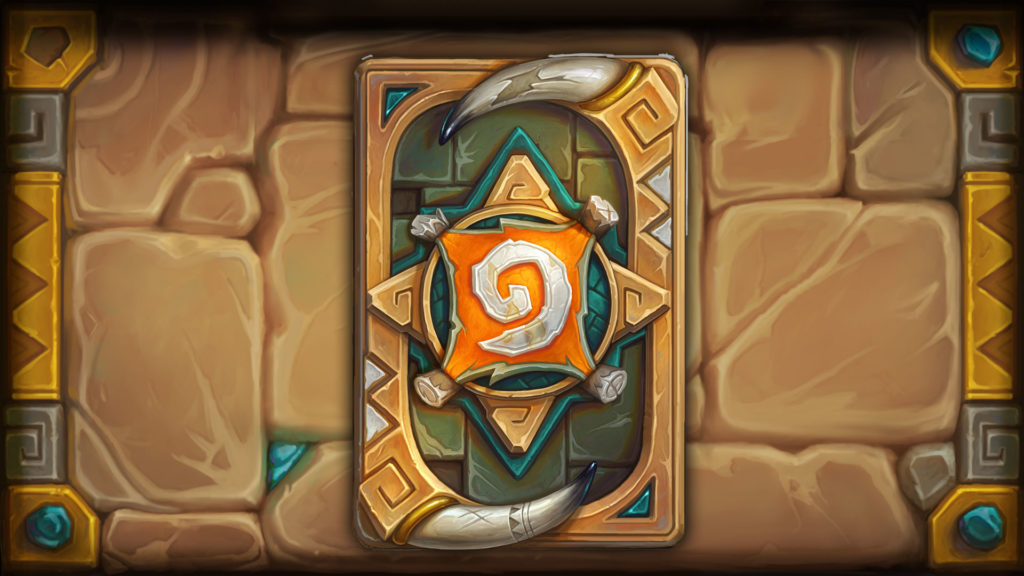