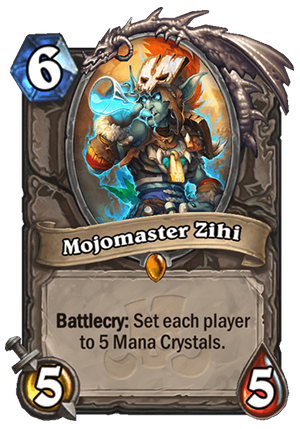 Sadly, she was still two credits short of her Witch Doctorate.
Tweet

That is some cool card. It’s the first time we’ve got an anti-ramp card. Before you could only get rid of your own mana crystals, but never the ones of your opponent. This opens some interesting opportunities.

Let’s be clear here – this is not going to be a meta card. While yes, you COULD theoretically run it in Aggro as a regular card, to drop it in the late game and delay some AoE removals (Twisting Nether) or big minions (The Lich King), I don’t really think that Aggro wants to run a 6 mana 5/5 minion that is absolutely useless in faster matchups, and even not always useful vs Control.

But this is a tech card versus some decks. One of the decks it absolutely counters is any Mecha'thun build. You see, in order to make Mecha’thun active, you need to have no cards left in your deck and only the Mecha’thun combo in your hand. However, since those combos cost 10 mana (Priest’s, Warlock’s and Druid’s alike), playing this right before they drop it means that… yeah, they can’t play it. Now they have to wait until they get back to 10 mana, so you have enough time to just develop the board and kill them while they’re in fatigue and don’t draw any more removals etc. Yes, we have some other Mecha’thun counters, but I feel like this might be the best one.

But it’s not only Mecha’thun decks – it counters any combo deck that needs to be at 9-10 mana to perform the combo. Let’s say that you face Shudderwock Shaman that has set up the entire combo and you’re just waiting for him to drop the final piece – Shudderwock himself. Well, by playing this you can deny it for 3 extra turns, possibly giving you enough time to finish the game.

And obviously, it counters Druids too. They had Wild Growth and Nourish, putting them 3 mana crystals ahead? Well, just before their Turn 10, when they wanted to refill with Ultimate Infestation, you drop this card. Now they’re back to 5 mana, with a dead 10 mana card in their hand. That’s one way to win against Druids. Against mill variant with King Togwaggle and Azalina Soulthief, you can also drop it when they cycle through their entire deck and are ready to drop the combo on you. Well, bad luck, now they have to wait a few more turns to do it, giving you enough time to develop a bigger board when they can’t really do much.

As you can see, this is an interesting card with many applications, but I believe that it will mostly be a tech card, played when the need arises. If those kinds of decks will make a significant part of the meta, this card might be used to counter them. The effect is really powerful, but also very situational, which might mean that it might not see the play at all in the end. If the strategies it counters will be a small part of the meta, or won’t be present at all, there will be no reason to run it.