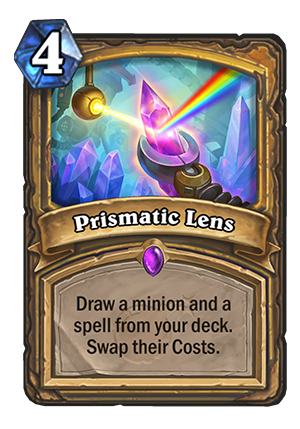 Prismatic Lens is a 4 Mana Cost Epic Paladin Spell card from the The Boomsday Project set!

Draw a minion and a spell from your deck. Swap their Costs.

Mined exclusively from the dark side of the moon.
Tweet

This card is a real deck building challenge. Drawing 2 cards for 4 mana is pretty bad, but it’s not the end of the world. So for it to be a good card, the secondary effect needs to work. It always draws a spell and a minion, and it swaps their mana cost. Which means that there are two ways to make this card work.

First is playing cheap spells and expensive minions. Playing this might let’s say draw your 1 mana Blessing of Might and Tirion Fordring, then switch their mana costs. You will have a 1 mana Tirion and 8 mana buff. You obviously drop Tirion as soon as possible, out-tempoing your opponent and possibly winning the game.

And second is playing cheap minions and expensive spells. If you build an Aggro deck with lots of 1-3 mana minions, and then put some more expensive spells like Spikeridged Steed or Dinosize, then you will end up with a cheap buff and an expensive minion. Something like a 1 mana Dinosize can carry the game easily, meaning that it also makes lots of sense.

That said, I’m not sure if those decks will be good enough. You’re limiting yourself, not to mention that you need to draw this card in the first place. That’s why this card is pretty much impossible to rate correctly right now, it might take week for people to figure out which builds it goes into. Maybe something like a Secret Paladin with some expensive minions? Or Spiteful Paladin running only big spells like Dinosize and possibly even Kangor's Endless Army (while making it a Mech deck)? Hard to say. But I like the cards that aren’t very obvious, and this has some solid potential.