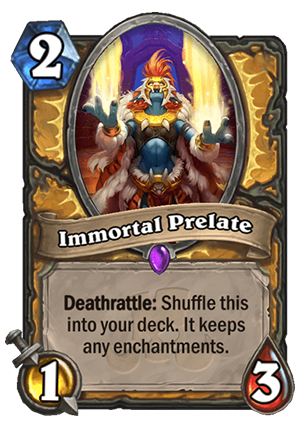 Deathrattle: Shuffle this into your deck. It keeps any enchantments.

She protec.
She attac.
But most importantly,
she come bac.
Tweet

Oh look, it’s a minion version of Kingsbane! Of course, it being a minion means that it’s much weaker, since it’s vulnerable to effects like Silence and Transform.

In theory, a card like that can be really powerful. Every time it dies, if you buffed it, it gets stronger and stronger, getting shuffled back into the deck. It’s amazing if your deck is concerned about fatigue too, playing two copies of those should be enough to pretty much not worry about fatigue.

The card can get insane value over time, but the problem is that it’s super slow. 2 mana 1/3 is very weak, it’s something that you nearly can’t drop against Aggro on Turn 2, because it will get eaten before it does anything. Keep in mind that the first buffs you play on it also don’t have any immediate pay-off – you’re just buffing an understatted 2-drop. Only when it dies and you draw it again (or pull it out from your deck) it starts giving you value/tempo, and that might be too late. It’s a bit like Dire Frenzy in Hunter. In theory, having a bunch of overstatted Beasts shuffled into your deck sounds sweet. In practice, not enough immediate payoff makes it just too slow and unreliable (keep in mind that once it gets shuffled, you might not draw it in a while).

Another issue is Silence/Transform. If you want to use it as a massive late game threat vs Control decks… it probably won’t work. Because most of the slow decks run some sort of card that lets them deal with it. Odd Warriors have Ironbeak Owl, Even Warlocks have Spellbreaker, Shudderwock Shamans have Hex etc. And it’s not like they have to draw it early – they can Silence/Transform it after it gets shuffled and played again.

And finally, what kind of deck would want to play that? Quest Paladin – not really, it’s just too slow, you’d rather play the Murloc 2-drops that gives you the buffs back on Deathrattle (so you can finish the Quest quicker). Control Paladin? It doesn’t play enough buffs for it to be worth it. Maybe Even Buff Paladin? That might be a consideration, actually. The card would suck against Aggro, but it could be a great long term threat in slower matchups, as long as it would get Silenced…

The thing this card has going for it is the Call to Arms synergy. The fact that you can pull them out with CtA makes it a bit better, but the main problem here is that CtA can’t be played in Even Paladin, the most likely candidate to run this card.

It’s a pretty cool card, and it can find its niche, but I don’t see it being too good, simply because it’s soooo slow and it’s counterable. Kingsbane is also super slow, but there’s nearly no way to counter it completely.