Mage and Elementals – this combination goes hand in hand since the early Warcraft III days. That is why Water Elemental became one, if not the most classic Mage minion in Hearthstone.

With 2017’s Journey to Un’Goro, Team 5 finally decided to introduce the Elemental minion type with their synergy being based on if an elemental minion has been played on the previous turn. This signaled the start of the up and coming Elemental Mage archetype. From there on, more and more Elemental minions and spells have been added to the card pool and to the Mage class in particular.

Sadly, the Elemental Mage archetype has never been able to make it to the highest ranks of the tier lists. However, this could very well change with the release of Rastakhan’s Rumble. Let’s take a look at working lists from the past and theorycrafted decks for Rastakhan’s Rumble!

You’ll be able to find all of our pro and streamer lists on our Elemental Mage Archetype Page!

Elemental Mage in the Past

As already said, Elemental Mage became a thing right after the release of Journey to Un’Goro. Back then, Thijs played this tempo-based iteration of Elemental Mage with great success:

This list showcased the heart of Elemental synergy: Early game power houses like Babbling Book and Mana Wyrm secured the board state, to safely reach the mid and early late game. And that is where Elemental Mage, up to this day, truly shines! Minions like Tol'vir Stoneshaper and Steam Surger provided stellar removal and survivability against aggro-based archetypes, while Pyros, Servant of Kalimos and Blazecaller produced tons of value and board swing potential.

From there on, Elemental Mage shied away from the tempo approach and used more and more control tools to build in late game win conditions:

With over 18 thousand games played and a very reliable win rate of 53 percent overall, this Elemental Mage list has been quite popular over the last few weeks of the late Boomsday meta. As we can see, Elemental Mage has received many additional tools over the last two expansions. Frost Lich Jaina may be the single-most important addition for the archetype, as it single-handedly showcases a win condition on its own.

The Witchwood introduced a very weird card engine involving Archmage Arugal and Book of Specters which has been working surprisingly well in minion-based archetypes like Elemental Mage, and not only that: The average hand size increased by a ton, and that is why the inclusion of Mountain Giant as well as Astromancer makes even more sense. 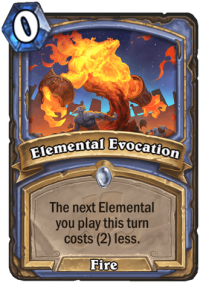 First off there is Elemental Evocation, or as we should call it, the pre-nerf Innervate for Elementals! And that is exactly it: Jet fuel for our minion-based archetype that revolves around value and high-pressure mid game. With Elemental Evocation we can fast forward into either securing a complicated board state or producing more hand value. This card may be the strongest addition overall, as it allows Elemental Mage to create board and value swings even earlier – just like Druid did with the old version of Innervate.

Scorch marks one of two new removal tools for Elemental Mage. Similar to Wing Blast, this card can be reduced to a mere 1 mana – if it fulfills the Elemental condition. Thanks to cheap elementals like Fire Fly and Glacial Shard, this spell can work wonders against early high-health threats. 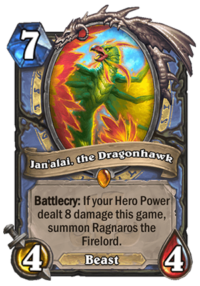 The community decided to call Arcanosaur the “budget Duskbreaker”, which may fit from a theoretical point; however, this minion perfectly fills the gap called mass board removal. Mage as a class has plenty of that in the form of spells, and that is why Elemental Mage wasn’t able to make it work in the past. This is the sole reason we have seen Meteorologist in plenty of lists, and Arcanosaur should be a far better and more reliable version of it.

The Loa of Dragonhawks, Jan’alai, makes a very special appearance in the new Mage toolkit. Being one of the very few Beast class cards outside of Hunter, Jan'alai, the Dragonhawk can summon Ragnaros the Firelord, which has been given the Elemental tag when it was introduced. Dealing eight damage with our Hero Power can be quite challenging, but the board swing could make it worthwhile in the long run.

With those new tools at hand, Elemental Mage can be split into two sub-archetypes: Tempo and control.

Tar Creeper and Tol'vir Stoneshaper can buy additional time, and once we arrive in the mid game, the Elemental value machine starts to take off: Servant of Kalimos and Bonfire Elemental will produce more and more Elemental synergy, and Frost Lich Jaina serves as the top-end inclusion to seal the deal in terms of health total and sticky board states.

A midrange iteration of Elemental Mage will profit the most from Elemental Evocation: Not only does it help to reach a mid game board status earlier; it also lets you play your more situational cards like Mind Control Tech or Voodoo Doll at the right time so that you can keep up the pace.

Scorch is a 2-of in this list, just because we need to try and get our other sources of damage to hit face as often as possible. Blazecaller and Fire Plume Phoenix represent a total of 14 burn damage, which is quite a lot compared to other minion-based decks, and one copy of Arcanosaur additionally helps putting those points of damage where they belong.

The second theorycraft deck version takes a more control-focussed Elemental Mage approach. It features less tools to fill the board in the early and mid game and we can’t get that big Keleseth tempo spike; however, this version of Elemental Mage tries to produce even more value in the mid game combined with early and late game threats.

Mountain Giant serves as a health insurance in the early stages of the game. Elemental Evocation helps a ton with that while playing cards to defend ourselves, and it can deliver a swift 8 or 16 damage early depending on what the opponent can do against it!
Astromancer creates a similar board swing. It encourages holding your cards as well, something that this version of Elemental Mage can do best through value reproduction.

That value reproduction will be driven by Archmage Arugal and Book of Specters, two cards that should only be played together. You can easily fill up your hand in the mid and late game to either find answers against a problematic board state or to get to those last points of face damage provided by Fire Plume Phoenix and Blazecaller.

The inclusion of Arugal is the main reason why we don’t see Servant of Kalimos in this iteration of Elemental Mage: Minion-based archetypes love value, but too much of it can make the deck perform poorly. That especially goes for control, and that is why proactive cards like Zilliax are included as well. Reliable answers are the best answers!

I personally had to make a case for Jan'alai, the Dragonhawk in this list. You will use your Hero Power much more often, just because you want to hold your cards in the early game. You will never play it on curve, but a control list doesn’t want to do that. It’s actually quite the opposite! Similar to Mountain Giant, it can serve as a health insurance. It is a safe way to heal for 8 when you have Frost Lich Jaina active, and Ragnaros provides a lot of additional late game reach against high armor classes like Druid and Warrior.

All in all, Elemental Mage could make a solid appearance on the meta stage of Rastakhan’s Rumble. Elemental Evocation makes it easier for the archetype to enter mid game hyperdrive, and the lack of removal especially against aggro and tempo opponents will be filled by Scorch and Arcanosaur.

With its new tools, will Elemental Mage finally rise up? Can we expect even more sub archetypes than control and midrange? Let us know in the comments!