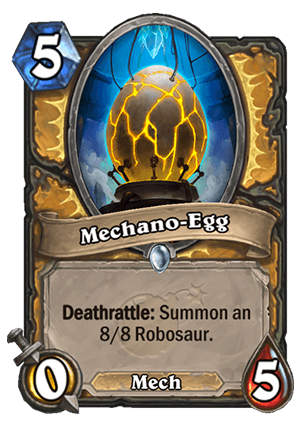 Mechano-Egg is a 5 Mana Cost Common Paladin Minion Mech card from the The Boomsday Project set!

When you need more iron in your diet.
Tweet

Eggs, eggs everywhere! This doesn’t look particularly tasy, but an 8/8 coming out of it is no joke. It’s slower than Devilsaur Egg, even more vulnerable to Silence (because you prefer opponent to Silence your 3 mana minion, not 5 mana minion), but the main problem is activating it. I mean, it won’t be a problem in Paladin, but I’m talking about efficient way to do it. Hunter plays Eggs now, because it can Play Dead it, or Terrorscale Stalker it. Often even on the same turn, leaving opponent with no time to answer. This is different. You can only activate it with a bunch of buffs, and given that it has a high health already, adding another buff or Magnetic Mech onto it means that you probably can’t even sacrifice it immediately. So ultimately, it will be really, and I mean REALLY weak to Silence. Like, imagine you spend 5 mana on it, then spend some more mana on the buff and it gets Silenced, leaving you with basically nothing. I know that’s looking at the worst case scenario, but still.

The only cool point is that if you run Meat Wagon (which you can draw with Crystology, by the way), this card gets pulled out 100% of the time. That’s actually quite good – you can pull it for 0 mana or buff Meatwagon so it will pull out something bigger too.

So in the end, I’d say that it will be a meta call. It will REALLY depend on how common Silence is, since Paladin’s only way to activate it is buffing it. Alternatively, we might see some Crazed Alchemist shenanigans, but I’m not sure if a vanilla 8/8 is really worth that much hassle.