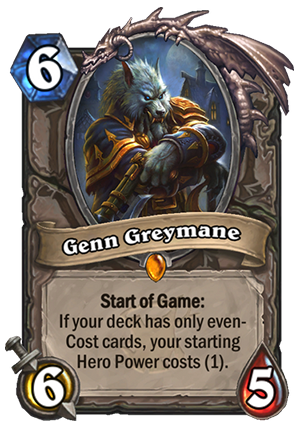 Genn Greymane is a 6 Mana Cost Legendary Neutral Minion card from the The Witchwood set!

Start of Game: If your deck has only even-Cost cards, your starting Hero Power costs (1).

Ever since Sylvanas killed his son, he's dreamed of getting… even.
Tweet

Both Genn and Baku are the definition of build around cards, even more than Prince cards (e.g. Prince Keleseth) or Highlander cards (e.g. Reno Jackson). It’s the biggest restriction we’ve seen so far. For example, with Prince you couldn’t run 2-drops – with this one you can’t run any card that costs 1, 3, 5, 7 or 9. That’s a huge difference. Even Highlander cards were easier to build around – you sometimes had to fill your curve with sub-optimal cards, and had to drop some good ones, but at least you had a curve.

However, the huge advantage of those two is that you get the effect activated as soon as the game starts. It’s not like the other two restrictions, where you first had to draw the card and play it. Actually, you don’t even want to draw those cards, as they’re pretty poor stat-wise.

Having the effect up from Turn 1 MIGHT be a reason to play those two. Another thing is that while you are often forced to play off-curve, you can actually fill your turns with Hero Powers. For example, with Genn, you can HP on T1, play 2 mana card on T2, play a 2 mana card + HP on T3 etc. On the other hand, with Baku, two odd cost cards make an even cost play. On Turn 2 you can just Hero Power, and then on Turn 4, for example, play a 3 mana card and a 1 mana card. So while you are more likely to go off-curve with those cards, it’s not like you will float mana every turn.

But let’s look at Genn in particular. To be honest, I think that upgrading a Hero Power is a stronger effect than making it cost 1 in most of the cases, but the 1 mana Hero Power has some upsides. One of the biggest upsides is the fact that you can Hero Power on Turn 1, so you ALWAYS have a Turn 1 play, even if it’s not amazing. So, this card would work best in decks that a) want to Hero Power often and b) don’t mind Hero Powering on Turn 1. I’ve heard some voices that it might be good in Warlock or something, but I really don’t see it – as a Warlock you REALLY don’t want to drop odd-cost cards like, you know, all the good Demons (Doomguard, Voidlord), Skull of the Man'ari / Possessed Lackey etc. It just makes no sense at all.

The class I think this would fit into most is actually Paladin. The most powerful Paladin cards are even cost – powerhouses like Call to Arms or Sunkeeper Tarim could still be played. Paladin doesn’t have a lot of great 3-drops (Rallying Blade is rotating out) or 5-drops (current Dude Paladin plays Stand Against Darkness, which also rotates out). Given how well Paladin synergizes with its Hero Power, I actually think that we might see a deck like that. No 1-drops might be a slight problem, but would it really? You still have a 1/1 on Turn 1, every single game. It’s not amazing, but it’s not bad. Then, no 1-drops means that your Call to Arms gets better on average, as you’re always going to pull out three 2-drops from it (you’d want to add some 2 mana Taunt, though, because pulling a Taunt from Call to Arms was pretty good). Given that a Paladin deck like that would be quite heavily reliant on tokens, filling the odd turns with Hero Power doesn’t sound that bad. Like, on Turn 3, playing Knife Juggler + Hero Power can sometimes be really good, especially if you snipe something. If we get some even-cost Silver Hand Recruit synergies, then I really think that it might be a thing.

The other deck I could see doing this is Shaman, especially if the class gets some more even-cost Totem synergies. The reason is that Hero Powering on Turn 1 is still solid as a Shaman, as it gives you a body on the board. And then, in the right deck, Shaman’s Hero Power can be really synergistic. It looks like the new Shaman Hero also costs 8 mana, so if it’s powerful, you could potentially see them both in a single deck. As much as I’m quite sure that it might work in the case of Paladin, when it comes to Shaman it really depends on the cards they get this expansion. Shaman is in a bad spot right now, and if they print some great, odd-cost cards, then running this would not work most likely, as you’d prefer to get your strong cards over cheaper Totems.

All in all, those effects are incredibly interesting. Right now it’s absolutely impossible to say whether they will see play, but I can see that they have some potential. We’ll have to see the new cards first, and even then we’ll most likely have to test those out extensively before giving out a final verdict. But if I had to give my rating out right now, it would probably be…

P.S. One thing I forgot to mention is that it only reduces the cost of BASIC Hero Powers. So you can’t go for any crazy shenanigans with Hero cards or maybe other ways to change your Hero Power. Obviously, it doesn’t mean that you can’t play it in the same card as a Hero – once you get to the point when you want to play the Hero, you can probably afford to pay 2 mana for the Hero Powers. But it would most likely work best in the decks that don’t want to play Hero cards at all. 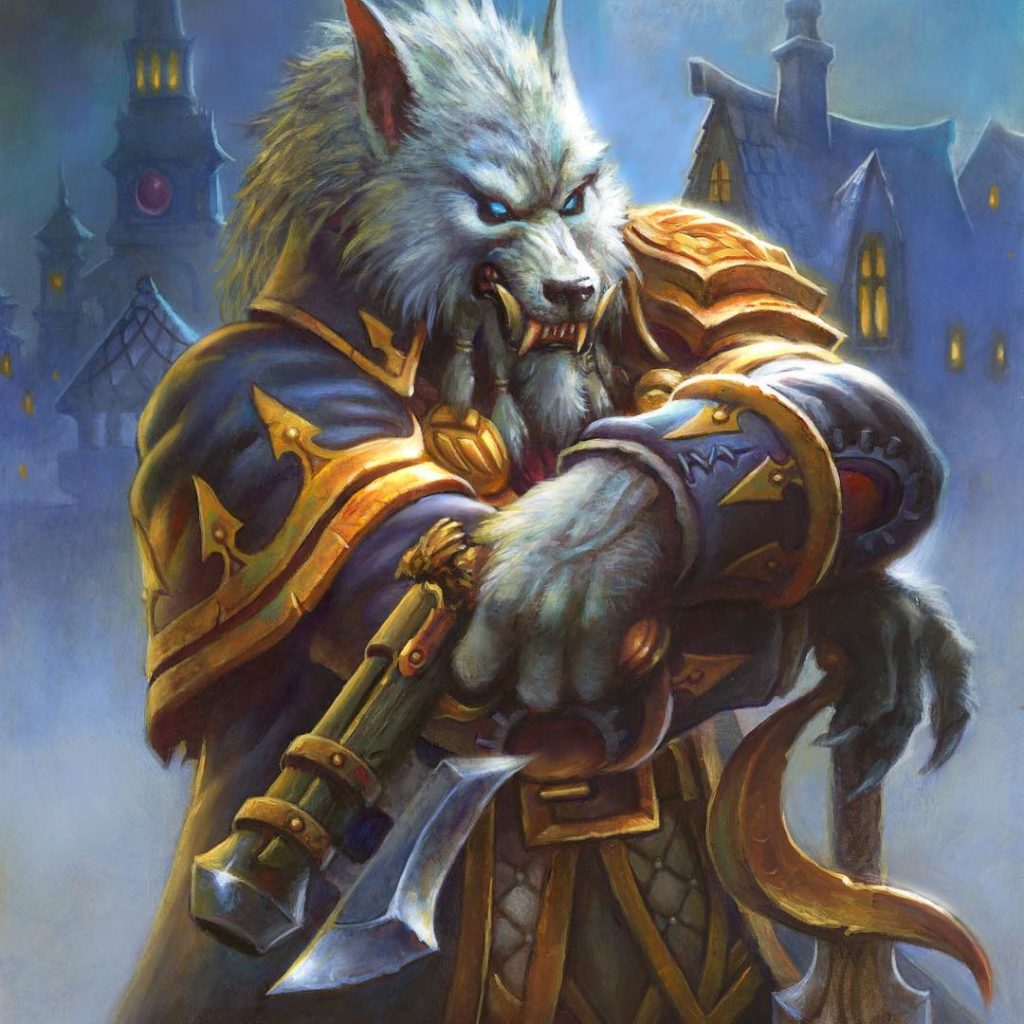