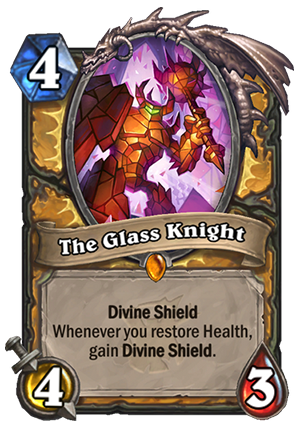 The Glass Knight is a 4 Mana Cost Legendary Paladin Minion card from the The Witchwood set!

She seems scary, but she's got a glass jaw.
Tweet

It might not seem like it, but a 4 mana 4/3 with Divine Shield isn’t all that bad. It’s better than C'Thun's Chosen and to be fair, that card was often solid to drop on the curve (better against decks with low minion counts, worse against token decks that spammed the board).

What I like about it is that the effect basically means that you can’t abuse it in an aggressive deck. I mean, you CAN, but you don’t really want to put healing cards into your Aggro deck.

However, if you play a slower Midrange, or possibly a Control Paladin, you will probably have some life gain. Truesilver Champion is the best example – after Rallying Blade rotates out, you’ll most likely want to play the 4 mana weapon instead. Given that lots of healing cards are rotating out, you might possibly want to run e.g. Benevolent Djinn too – those synergize nicely, as Djinn replaces the Divine Shield on The Glass Knight every turn. Later in the game, it also combos nicely with Uther of the Ebon Blade – Lifesteal weapons means that you can theoretically restore its shield every turn if it doesn’t die (although it will be much easier to kill it in the late game).

It doesn’t seem like much, but it might be really annoying in the right deck. If you can’t get through the Divine Shield and kill it in a single turn, it will basically re-gain Divine Shield very often if you play a deck with lots of healing.

It also synergizes very well with the buffs. If you buff it, not only it’s harder to take down, but each Divine Shield will be worth even more.

Now, the question is, will a slow Midrange/Control deck with lots of healing exist? It really depends on the meta. Healing is not a great mechanic in lots of matchup. Even against Aggro, you need the board clears FIRST and only then, when you have stabilized, you need to heal up, so putting too much healing won’t do much. It’s much worse when facing Control decks – there are games in which you’re at full or close to full health for the majority of the game and healing is useless. That’s why you can’t pack too much of it into your deck. Realistically, healing is most useful against Combo decks that don’t OTK you or burn decks. So if there will be lots of them in the meta, a Healadin might raise as a way to counter them. But more realistically, if we see slow Midrange or Control Paladin, it will probably run only a few healing cards at best.

So, in the end, I feel like it’s a solid card and that’s about it. It’s not too strong, and I doubt that a deck built around it (Healadin) will exist. Too much healing in a deck is a really bad idea. But it MIGHT be worth to run it with just Truesilver and maybe 1-2 other healing cards. It does not need to regain its Shield every turn, even if you re-bubble it once, it’s still going to be good. 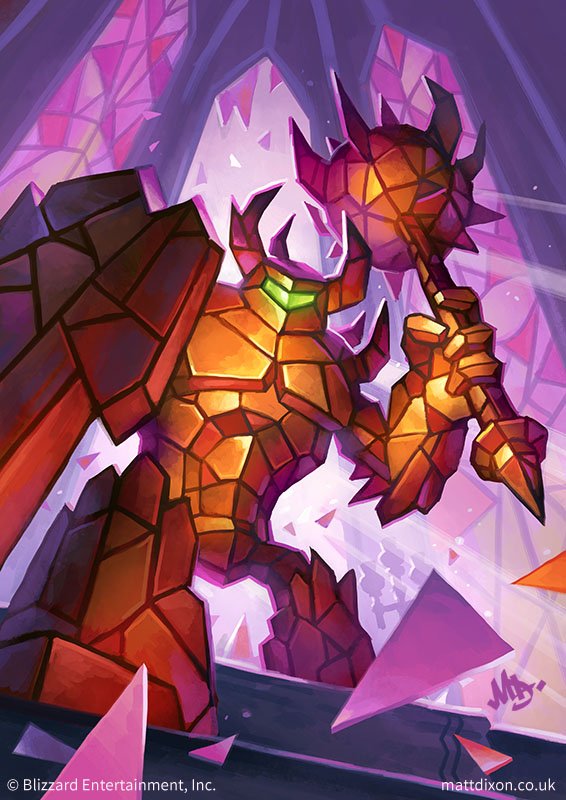