It only was in 2018 when the Rush keyword got introduced through the Witchwood expansion back in April. Back then, the community was torn whether Rush would serve as a worse version of Charge or if it could fill the gap of a true board-centric card mechanic.

Almost one year later we can safely say that Rush has been a total success in terms of general design, and several archetypes benefited from its addition.

Rush Warrior may have been the most prominent archetype in regards to the keyword. And while it may have been a part of the tier lists for less than a year, its true core formed out of Tempo Warrior, a deck that has been around since the beginnings of Hearthstone.

With that in mind, let’s take a look at Rush Warrior decks from the past, new card additions with Rastakhan’s Rumble, and some theorycrafted lists for the upcoming expansion meta!

You’ll be able to find all of our pro and streamer lists on our Rush Warrior Archetype Page!

It is safe to say that Rush Warrior so far has always been an archetype based on tempo gameplay, just because the Rush mechanic itself creates tempo by definition: Two for one trades as well as instant board interaction push you ahead of your opponent. A prime example for that would be a list played by Brian Kibler back in April when the Witchwood expansion released:

This list has everything that Rush had to offer for Warrior: Warrior-exclusives like Redband Wasp, Rabid Worgen, Militia Commander and Darius Crowley formed the core of Rush minions that this deck was built around. That combined with Tempo Warrior classics such as Kor'kron Elite and Grommash Hellscream provided a very complex and board-focussed playstyle for this particular archetype, especially against board swing decks like Cubelock.

And that core composition basically never changed, as this next list shows:

The reason why this particular list was chosen is that it perfectly shows how adaptive the Rush Warrior archetype has become over time. We still see most of the core Rush minions, but also new additional cards like the mech package containing Eternium Rover, Dyn-o-matic and Zilliax as well as Fungalmancer. Everybody’s favorite tempo noble Prince Keleseth has made it as well, which shows that Rush Warrior serves as a great example in terms of archetype development and playability.

With Rastakhan’s Rumble, Rush Warrior receives two class cards that could see play in the archetype: 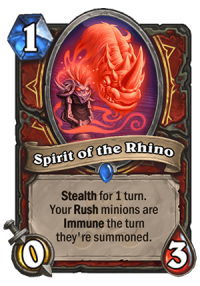 This card called Spirit of the Rhino showcases the wet dream of every Rush Warrior player. Rush as a mechanic feels great, but often you have to instantly sacrifice minions on the turn to get out of a sticky board situation. But this stellar 1-cost card knows a way out, and it’s versatile as well! May it be versus aggro opponents to enable effective 2 for 1 trading when played against early high-priority targets, or against late game taunt walls.

That’s not enough already? Wait, there is more! It is confirmed that Spirit of the Rhino works with Rush minions provided by Dr. Boom, Mad Genius! That means that if you have played Dr. Boom and have Spirit of the Rhino on board, every mech minion becomes immune, too! This card provides so much value and versatility that it single-handedly turns around the way to think about and play any Rush Warrior list.

The second new Rush minion is Akali, the Rhino, the Loa of Rhinos featuring the Warrior rumble team. 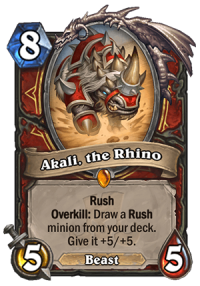 On first sight, most players would say that this card is pretty bad. 8 mana for a total of 10 stats looks and feels very weak, no matter the card text. But let’s take a closer look:

First off, Akali, the Rhino has Rush. That alone makes it a perfect fit for Rush Warrior. It also carries the Overkill keyword, and with that comes an even more powerful effect: Each time Akali kills with Overkill, we draw a rush minion, which is great value in our Rush-centric deck by itself; and not only that, we buff the minion we want to play as well, and +5/+5 is nothing to scoff at.

I personally have compared this card with Rotface. It has been a very questionable inclusion in Warrior lists and has a similar stat line compared to Akali. However, Akali’s effect is much more targetable and reliable in terms of draw and value overall, so it definitely can find its place in the right list.

Looking at these two new inclusions, you could think that Rush Warrior won’t change as much. We theorycrafted two very different lists to show you that Rush Warrior could play out quite differently in the upcoming Rastakhan meta:

This version of a Rush Tempo Warrior follows the recent Boomsday development: It is built around Prince Keleseth and high-pressure mid-game minions.

Spirit of the Rhino helps you to defend your board against heavy board swings like Mountain Giant or Voidlord; Akali, the Rhino can turn into a draw engine on its own. Thanks to Fungalmancer, Spellbreaker and Blood Razor you will easily be able to control the health totals of enemy minions, enabling the Overkill keyword.

Cards like Supercollider and Scourgelord Garrosh help to pave the way for your Rush minions to go face in the upcoming turns as well, and Dyn-o-matic works wonders against scary board states. Countess Ashmore should not be a auto-include, but the list doesn’t run Battle Rage, and you want additional draw besides Town Crier.

Grommash Hellscream and The Lich King top off this very meta-focussed list. As already said, Spirit of the Rhino completely changes the way you will be playing this deck, and Akali, the Rhino should be able to create quite a few interesting scenarios.

The next list we’re covering looks a lot more experimental. This Rush Mech Odd Warrior may seem all over the place, but it definitely focusses on one particular thing: Board value!

One big part of this deck’s win condition revolves around the Mech package. May it be Eternium Rover and Skaterbot for the early stages of the game, Dyn-o-matic and Zilliax for your mid game board swing, or Beryllium Nullifier as a late game health insurance: Mechs and Rush are in a true love relationship, they just don’t know it yet!

The key to success is to combine those two with the help of the Magnetic mechanic. Skaterbot and Zilliax serve as the main shotkins, and with that you can turn every one of your Mech minions into a Rush board threat. Spirit of the Rhino will be pastor for our precious couple, and Omega Assembly and Dr. Boom, Mad Genius multiply in value thanks to this beautiful connection between well-designed game parts. Last but not least, Spirit of the Rhino is bound to forever hold together our long-time marriage between Rush and Mech minions!

And if that wasn’t already enough, you will also receive an upgraded Hero Power as well! With that and cards like Stonehill Defender, Fiery War Axe and Devastate, Warrior’s new removal spell, you will be able to survive in case you don’t draw you early Mech and Rush minions.

Keep in mind: Every mech minion, may it be discovered through Omega Assembly, or summoned by Boom’s Hero Power, will be affected by Spirit of the Rhino. One can’t stress this interaction enough, because it will absolutely kill it in the long-term value game, something that Dr. Boom, Mad Genius already has been very good at! As already said, compared to the usual tempo-oriented approach, this list is very experimental and almost feels like a combo deck.

No matter what style of play you prefer, the Rush Warrior archetype will have a future in Rastakhan’s Rumble. Spirit of the Rhino is a game-changing card, and if played at the right time will be able to turn around board states like nothing else. Akali, the Rhino could turn out much better than most people think it will, and with that, Rush Warrior could unite both new players and old Tempo Warrior fans under one banner to rule the tier lists of the upcoming Rastakhan meta!

Will Rush Warrior be the dark horse of Rastakhan’s Rumble? Can it compete with other up and coming midrange archetypes? Let us know in the comments!