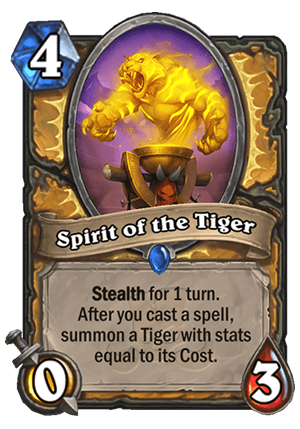 Spirit of the Tiger is a 4 Mana Cost Rare Paladin Minion card from the Rastakhan's Rumble set!

Stealth for 1 turn. After you cast a spell, summon a Tiger with stats equal to its Cost.

Less of a cantrip and more of a cat-nip.
Tweet

Spirit of the Tiger Card Review

Spell-heavy Paladin build is getting better and better. Now it has another incentive to play those expensive spells on top of just making Shirvallah, the Tiger cheaper.

I’m not sure about this card. On the one hand, gaining extra tempo by summoning big minions while casting spells seems to be more of a Midrange Paladin win condition. But at the same time, the fact that it costs 4 mana and does nothing immediately means that it might not fit into such a deck. A slower build can afford to have a dead turn or two, because it will just sweep the board next turn (while summoning some minions with this card). Even Paladin probably won’t want to play this, because it’s too slow. So a Control build with Shirvallah seems like the best option.

It’s true that Control Paladin does need a win condition, but I don’t think that summoning some vanilla minions is that win condition. It’s not good vs faster decks, because you win those matchups without it. And against slow decks, it’s okay, but a few threats still won’t outvalue cards like Bloodreaver Gul'dan, Frost Lich Jaina or Deathstalker Rexxar, nor it will counter opposing combos.

Maybe with some more spell synergies you can try to make it work. Drop it one turn, play Spikeridged Steed or A New Challenger... next turn to protect it, if your opponent doesn’t have any direct removal you might snowball the game like that. But the problem is that it’s really hard to get any immediate value out of this card until the late game (on T10 you can play this + Steed on the same turn), and if you don’t, it’s pretty vulnerable to AoE or stuff like Mossy Horror.

So overall, while this effect is pretty powerful, between the fact that it’s pretty slow initially and that it’s hard to justify playing it in a faster deck, while the effect still doesn’t give a slower deck any real win condition… Yeah. If Control Paladin will turn out to be good because of other cards, I could see it being played. But I don’t think it’s going to push the archetype enough to make it viable.