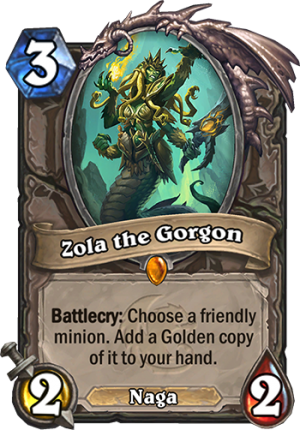 Zola the Gorgon is a 3 Mana Cost Legendary Neutral Minion card from the Core Set 2022 set!

Battlecry: Choose a friendly minion. Add a Golden copy of it to your hand.

Before anything else, even though it’s exciting, in order to better and honestly evaluate what she does, we have to immediately forget that the copy she adds to our hand is golden, because that’s absolutely irrelevant. Great, but irrelevant. Now, what does being able to add a copy of a minion mean? The most obvious answer is that it’s great with Battlecry minions. Obviously Zola’s stats are not great, but any deck that wants to generate more of a minion probably won’t care about the slight loss in tempo that comes with playing her. This is a value-oriented card. As such, she opens up new possibilities. We saw Manic Soulcaster being played in the Kazakus Mage lists from the previous Standard rotation and she is still core to most Reno Mage decks in Wild. The problem with Soulcaster is that she was a Mage class card. Zola now opens up that possibility to get 4 Kazakus potions with Brann for Priest and Warlock too, at least one of which has a prominent Kazakus deck currently in Standard.

Aside from Kazakus specifically, there is no shortage of good cards you could copy with Zola the Gorgon. Probably not cards that cost more than 7 mana, because they are not guaranteed to live until the next turn, but Zola is a better Youthful Brewmaster because she allows you to gain all of the value from your minion again without returning it to hand. This is particularly true when you want to get a copy of a fat defensive creature or perhaps even a Deathrattle minion. Her usefulness doesn’t begin and end with Battlecries, which makes her a somewhat unique figure in the value generating space, functioning a lot more like a Shadowcaster rather than a Youthful Brewmaster while keeping the minion’s stats… and unfortunately the mana cost.