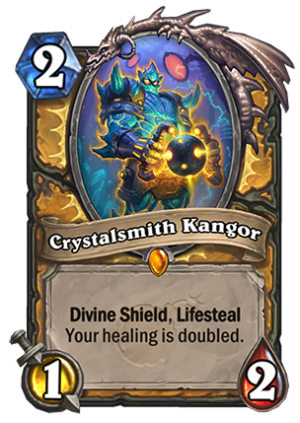 Crystalsmith Kangor is a 2 Mana Cost Legendary Paladin Minion card from the The Boomsday Project set!

He wants to tank, but Boom always makes him play support.
Tweet

I honestly expected something bigger, potentially with Mech synergy. But I’m always interested to see cheap Legendaries, from the design standpoint. They’re really hard to make interesting – on the one hand, you want the effect to be cool and strong, but on the other, you can’t make it too impactful, since it would be overpowered if you could drop it very early in the game. This is a great example of a well-designed cheap Legendary – okay body, can be dropped on the curve, the effect is strong, but it’s not very impactful early in the game and it can scale well into the late game.

The problem I have with this card is that it simply doesn’t fit into many decks right now. If it was a Mech, I would see it being played in Mech Paladin just for the body – 2 mana 1/2 with Lifesteal and Divine Shield is comparable to cards such as Shielded Minibot (trades 1 Attack for Lifesteal) or Annoy-o-Tron (trades Taunt for Lifesteal). But no Mech tag makes it significantly weaker, because you won’t be able to synergize it with Magnetic cards.

The effect itself is really powerful on a 2 mana body, but only in the right deck and in the right scenario. First, you need a deck that actually heals. While doubling the Lifesteal of this card is cool, it’s not really enough. You probably want to run it in a Control-ish Paladin with other healing cards. The sad thing is that lots of them, such as Forbidden Healing, have rotated out with Year of the Raven, so there aren’t many thrilling options (more might get printed). It synergizes really well with Uther of the Ebon Blade too – doubles the weapon healing from 5 to 10. Now, onto the right scenario. Doubling the healing is relevant only when you’re pretty low on health. If you have 20 health and you aren’t under any threat of dying, then doubling healing is a bit pointless. You want to double it against Aggro, where every point of health matters, as well as against combo decks, but only the kind that can’t OTK you.

I feel like it’s one of those effects that are strong in vacuum, but might just not be very useful in the actual in-game decks and scenarios. Right now, I’d say that if anything, the card will be played for its body, and the effect will be a nice addition that can come handy sometimes. Like, you wouldn’t mind pulling it out from Call to Arms, it has 1 Attack so it can get drawn by Crystology, 1/2 body with Divine Shield ain’t that bad to drop on T2 against Aggro, it can be useful in Corpsetaker deck. Because of the effect, the Lifesteal on him will double, so he will usually heal for 4 (although healing on Turn 2 is sometimes irrelevant, because you might be at full health anyway). It’s a solid card overall, and has a potential to become very powerful in the right deck and in the right meta.