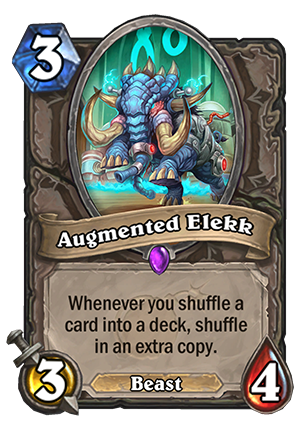 Whenever you shuffle a card into a deck, shuffle in an extra copy.

Very interesting card. Since there are lots of cards that shuffle extra cards into your (or your opponent’s) deck, there are many, many applications, and I think that theory won’t do them justice. Realistically, this will need to be tested to see whether it’s worth it or not. Because on the one hand, shuffling more cards is usually a good thing. But at the same time, you need to spend extra 3 mana to do it – the 3/4 body is nice, but you still add another card to the “combo”. Still, I will go through some of the potential combos you can pull off in Standard and talk about them a bit.

Rogue is probably the best class for this card. Starting with Fal'dorei Strider, it seems like Elekk was made exactly for that card. They curve into each other, and Strider shuffling 6 spiders is a huge deal. Not only it makes it much more likely to pull out one or two quickly, but it increases the total value of the card. Another obvious candidate is Academic Espionage – shuffling TWENTY 1 mana cards into your deck might seem like an overkill, but it will make drawing those discounted cards much more consistent. You can also use it with Lab Recruiter to shuffle even more copies of a given card (6 instead of 3), which might make sense in let’s say the Pogo-Hopper deck.

Other than Rogue, Warrior and Priest can use it in their respective “fatigue” decks. Warrior can combo it with Dead Man's Hand, but it seems a bit pointless – you go infinite with two copies anyway, so shuffling more cards at once doesn’t make a big difference. Dead Man’s Hand deck usually runs Direhorn Hatchling too, and playing Elekk right before the Deathrattle happens might be solid sometimes, an extra 6/9 in your deck. Similarly, Priest could use it with Archbishop Benedictus, but that card is already bad in most of the matchups, shuffling twice as much cards would make you even more fatigue-resistant, but is that really necessary?

You can also drop it with The Darkness to shuffle 6 Candles instead of 3, to make reviving it way more consistent. I doubt that’s enough to make the card playable, since it’s a 2 cards combo you need to hold off until at least Turn 7, but yeah.

Overall, you CAN do some stuff with this card. 3 mana 3/4 body also means that in matchups you don’t need it, dropping it on curve is a solid option. Your opponent might be afraid that you will use that effect anyway, so it has a sort of quasi-Taunt. It will most likely have more applications in Wild (such as meme decks with Iron Juggernaut), but I’m not playing the other format enough to really say whether it will be good or not. In Standard, however, it might not see play immediately, but it’s a card with high potential for some very specific combos. It’s not busted by any means, though, since it increases the mana cost of those combos by 3 and means that you need to draw this card first too.