Zayle, Shadow Cloak is a new card from Rise of Shadows. It wasn’t released with the expansion and came with The Dalaran Heist instead. 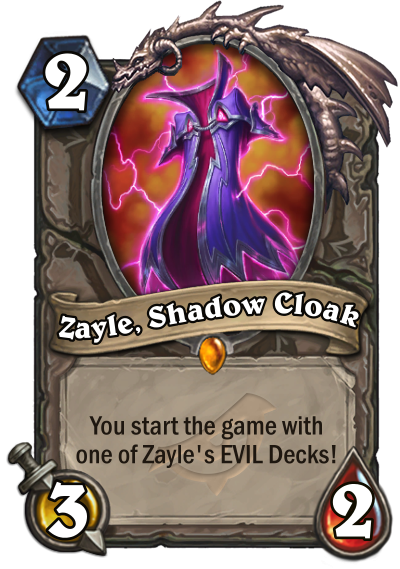 Zayle works exactly like Whizbang the Wonderful, but it gives you one of the five EVIL Decks instead of one of the 18 Deck Recipes.

When you add Zayle to your deck, you can’t add any more cards. Once you select the deck and hit play, you will roll one of the five decks and start the game with it.

Your opponent won’t immediately know that you’re playing a Zayle deck (and he might not realize at all). Your Hero & Hero Power will look normal.

The cool thing is that if you own a Golden version of Zayle, your Hero and entire deck will also be Golden!

How can I get Zayle?

Regular version of Zayle, Shadow Cloak can be crafted for 1,600 Dust (once The Dalaran Heist launches). There’s a bug right now that lets players open it in Rise of Shadows packs early.

Golden version is one of the rewards for unlocking all five Chapters of The Dalaran Heist (2,800 Gold or $19.99). You can’t get it otherwise.

Here’s a full list of the possible EVIL decks you can roll!