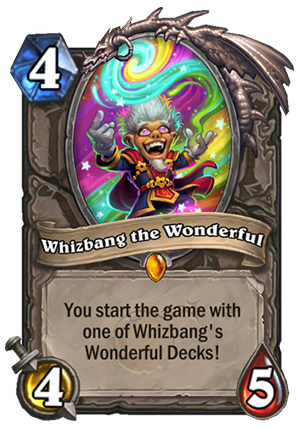 Whizbang the Wonderful is a 4 Mana Cost Legendary Neutral Minion card from the The Boomsday Project set!

You start the game with one of Whizbang's Wonderful Decks!

Amazing card, I just love it. I will quickly talk about the competitive aspect, but it’s not really important when it comes to that kind of effect. This card will be lots and lots of fun for any new player or player with a small collection. People without many cards will be able to enjoy the game, and that’s great!

About the competitive aspect. There is none. The card just sucks when it comes to competitive side of the game. Not only deck recipes are generally worse than the actual meta decks (some of them are really close, but others are just meh), but getting a random one means that you can’t really account for the current meta, common tech choices etc. Picking a Tier 1 deck to climb will always be better than picking a random Tier 2-4 deck every single game.

But, that’s not the point of this card. The point is to let new players enjoy actual, “meta” decks – EIGHTEEN different ones – instead of playing with the Basic cards and some Classic commons they’ve just opened. It’s a great card for casual players, who don’t feel like following the current meta trends or build their own decks and just want to jump straight into the game. It will let people play with lots of cards they would normally have no access to.

Deck recipes should easily be good enough for a new player to hit R15, maybe even R10. And that’s way more than they could do with their homebrew, random decks they have to play, because they have no cards. Better players could easily hit R5. I think that Legend COULD be possible, with enough skill and persistence, but it will be more like a challenge for the best players than a viable strategy.

And all of that, 18 different decks and tens of hours of fun for a price of a single Legendary – 1600 Dust. That’s a huge bargain if I’ve ever seen one. I’m honestly surprised that the idea passed. Then again, those new/casual players would be more likely to get frustrated with the game and quit rather than decide to drop money on the packs, so maybe it won’t impact the pack sales that much.

We still don’t know what deck recipes will be available in Boomsday, and how strong they will be, but I can guarantee that they will still be better than random, self-made decks from new players. 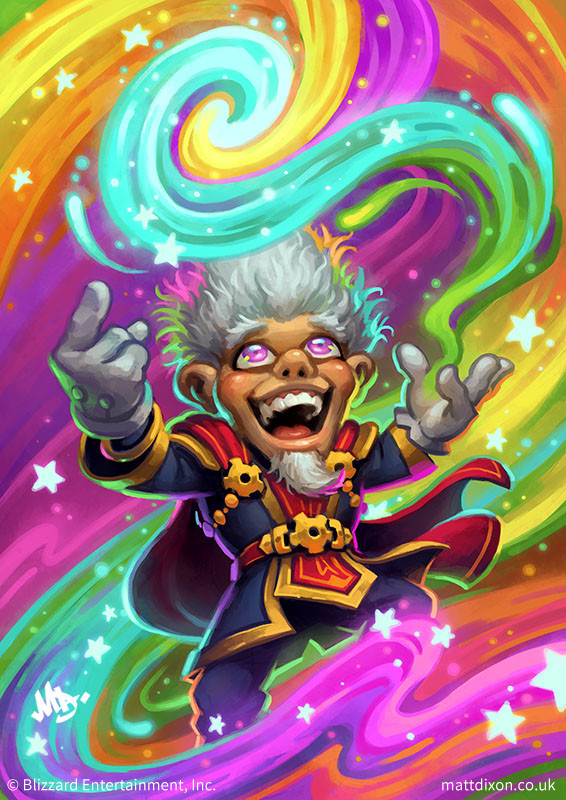