It seems that we are not getting a balance patch this week, so the current meta is here to stay for a while longer (at least until early next week). It’s not that the meta has been stale. Quite the contrary, over the past two weeks, we have seen two decks reach their ultimate form. First, Thief Rogue builds with two copies of Preparation became the norm, and this week we have seen Poison Rogue widely adopt the masquerade package of Maestra of the Masquerade and two copies of Wildpaw Gnoll. No other thievery cards are needed, Maestra powers up the Gnolls just fine.

As a result of this intense fine-tuning of Rogue decks, pretty much everything else has been left in the dust. Rogue now reigns supreme over the ladder.

That’s it. That’s the guide.

I will try to find a glimmer of hope from somewhere anyway. Taking a deep dive into performance statistics reveals that there are still some non-Rogue decks left that may be worth playing.

When in doubt, hit face. Face Hunter remains one of the strongest decks in the game. It is the best counter to Poison Rogue and can hold its own against everything else on the ladder as well. It is unfavored against Thief Rogue, but it is not hopeless in that matchup either.

There have been no major innovations for Face Hunter recently. I intentionally picked this slightly older list to showcase here because it still performs better than the lists we have featured since. It’s nice to change a couple of cards and try something different, but none of those attempts have resulted in a better deck so far. 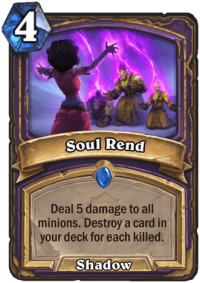 Quest Hand Warlock is the exact opposite of Aggro Druid: great against Thief Rogue, miserable against Poison Rogue. Soul Rend has found a whole new life as a precision weapon to kill Wildpaw Gnolls, and zero-cost Flesh Giants do not mind the small setback of being thrown back into the hand with Shadowcrafter Scabbs too much.

Sadly, the story is different when up against Poison Rogue. Repeatedly getting hit in the face with a big weapon, not having many minions to heal from, and then getting hit with direct damage spells is a nightmare for Warlock.

Quest Shaman is a less polarized version of Quest Hand Warlock. It is good against Thief Rogue and unfavored against Poison Rogue, but it neither crushes the thieves nor loses to poison as hard as Warlock. Shaman has a bunch of direct damage and also some defensive capabilities thanks to Feral Spirit and Bru'kan of the Elements. 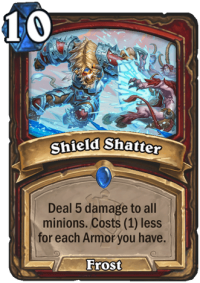 You know, these Rogue decks do not have infinite threats. They also do not have infinite damage combos. There is a long-forgotten archetype that used to only lose to decks that could either play one threat after another for a very long time or pull off an OTK that cannot be countered with armor. That deck, the legends tell us, is Control Warrior.

Brian Kibler recently found some success against Rogues with Control Warrior, so maybe there is still room for something new to come and fight against them. Alas, larger samples are not kind to Control Warrior: the deck is decent (not great) against both types of Rogue, but it has some abysmal matchups against Druids and Paladins.

Still, if you’re experiencing a heavy Rogue meta, it might be time to bust out the good old control decks and make them at least pay with all of their time, win or lose.

Our last, best hope against Rogue domination comes from a familiar place. Libram Paladin is the strongest steady performer against Rogue decks. Paladin is clearly favored against Rogue if you are low on the ladder, and as you climb higher and meet better players and more optimal Rogue decks, both main Rogue matchups become roughly even. But even is still better than losing, right?

Libram Paladin is a straightforward deck that has limited ways to reward creativity, it slowly becomes weaker as you climb the ladder. So naturally, it will perform better in lower ranks. Nonetheless, its inherent strength is enough to carry it even to high Legend.

The Best Decks to Beat Rogue

Face Hunter and Aggro Druid are the best decks against Poison Rogue. Face Hunter is less bad against Thief Rogue, so it is a safer bet for laddering. In fact, it is one of the best decks to take to the ladder overall.

Quest Hand Warlock is by far the best deck against Thief Rogue. Sadly, it crumbles against Poison Rogue.

Then, there is a group of decks that can put up a fight against both Rogue archetypes but are not guaranteed to succeed against either. Control Warrior is the newcomer in this group, as finally there is some room for it to breathe without too many OTK or midrange decks pressuring it down. Alas, there are still too many of those around for Control Warrior to truly shine. Quest Shaman and Libram Paladin are more well-rounded decks that can take on any opponents on the ladder, including Rogues, but every Rogue game is an uncertain battle for them.

Anti-Rogue decks have fallen off one by one as Rogue decks have become more refined. One week ago, I could have still talked about Bolner OTK Shaman and maybe Big Priest as potential contenders, but they have not been able to keep up with the improvements to Rogue. There are still some options left, but it begins to look like no amount of player creativity will win against the strongest class, and a balance patch is direly needed.