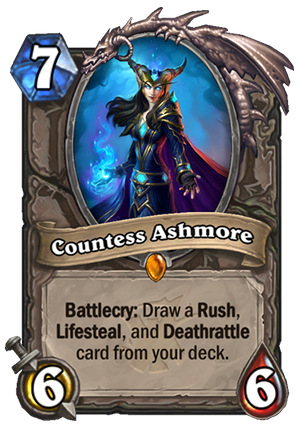 Countess Ashmore is a 7 Mana Cost Legendary Neutral Minion card from the The Witchwood set!

Battlecry: Draw Rush, Lifesteal and Deathrattle card from your deck.

I thought we were done with the Neutral Legendaries, but hey, we got one more. The Curator is rotating out and we’re getting a new version, and it’s arguably better. Curator was already a solid card – while it wasn’t always popular, there were at least a few decks that have played it during its time in Standard. This one is better, because the condition seems easier to meet. Beast, Dragons and Murlocs were rarely “generic” cards you’d want in every deck. Outside of a few exceptions, they were usually played only in specific decks built around their synergies.

However, this one draws a Rush minion, Lifesteal minion and Deathrattle minion. If we go with the Curator way to think about it, drawing 2 cards should be good enough and 3 cards should be insane. Deathrattle is probably the easiest one to get – lots of decks play some kind of Deathrattles.

Also, it doesn’t specify “minions” – it should mean that it can draw non-minion cards with those effects. Which means that, for example, Warrior might be able to draw Blood Razor and Priest could draw Spirit Lash. That’s a big deal. For example, you might want to play this in the Deathrattle Priest. Deathrattles are obvious, then you draw Spirit Lash as a Lifesteal (or well, just an Obsidian Statue, but you could play both just to be sure) and you can throw in a Rush minion or two, because they probably won’t be bad. Similarly, if you play a Warrior deck with Rush, you will also play the Woodcutter's Axe (and possibly Blood Razor too), so the Deathrattle part will be filled.

6/6 stats are also better than 4/6, but the lack of Taunt might hurt. Curator was often played for the Taunt in faster matchups and it often saved my life when I was staring at lethal. This can’t do the same. However, drawing Rush and Lifesteal cards is also good in Aggro matchups if you’re still alive at this point – Rush can fight for the board immediately, while Lifesteal, well, heals you.

While I don’t think that there will be lots of decks that will want to play it, since it’s inherently slow and fits only into the decks running at least two of those keywords, it looks really good on paper. Even if it doesn’t see play right now, it should get better as more Rush and Lifesteal minions are released over the rest of this Standard year (as Deathrattle isn’t really a problem, you can always put something like Loot Hoarder or Bloodmage Thalnos or even Plated Beetle into your deck).

Curator was a good card. Not broken or anything, but just good. I feel like this one is slightly better, so I would be absolutely surprised if it has seen no play.