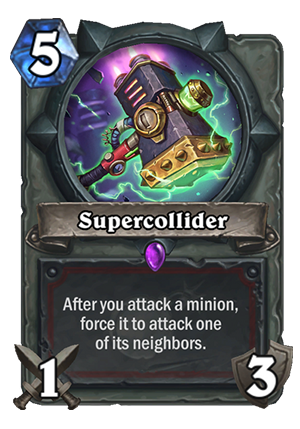 Supercollider is a 5 Mana Cost Epic Warrior Weapon card from the The Boomsday Project set!

After you attack a minion, force it to attack one of its neighbors.

Very cool concept, but seems a little bit too expensive for what it does. Let’s start with the upsides, before proceeding to the downsides.

A weapon can clear up to 6 big minions over 3 turns, which is massive for a 5 mana weapon. It works like 3x Sudden Betrayal on demand. A minion attacking minion means that BOTH take damage, so if your opponent has two 5/5’s and you hit one, both die. That’s really good.

It has some neat synergies. Like, if your opponent has Poisonous minion and you attack it, it can kill anything. On top of that, you can also GIVE your opponent a poisonous minion through Marsh Drake – have a 5/4 yourself and give them a small Poisonous. That said, I don’t believe you will be able to ATTACK the 2/1 and get value, since it will just die and the weapon triggers AFTER attack. But if he has only a single minion on the board, you can guarantee that both are cleared. Maybe we’ll see more synergies in this expansion too.

First of all, the attack value. Yes, it’s pretty irrelevant when you attack minions, but it means that you can’t really use it to push some face damage, which is important even in Control decks. Gorehowl is a Control card, but it can still be used to deal 7 if necessary.

Second, your opponent needs to have at least two minions on the board. Against a single minion, it just doesn’t work – it deals 1 damage and it has nothing to attack. If you’re playing let’s say a Control vs Midrange matchup, your opponent will commonly have only 1 minion on the board, since you’re actively trying to remove them.

Fifth, your opponent will be able to play around it with positioning, let’s say by putting a small minion between big minions. You might still be able to go around that by first removing the small minion with another spell, but such positioning tricks might be harder to play around on a slightly bigger boards (like putting biggest minions on the sides, with 2-3 smaller ones in the middle).

So, as you can see, the weapon seems to have more downsides than upsides. I really don’t think that a regular Warrior deck will want to run it. It might be tried out in an Odd Warrior, since the deck can overcome some of the issues more easily and it has a lower bar for what a good card is (since it doesn’t have access to some solid options). But overall, it looks rather weak. Not completely unplayable, but I doubt that we will see it very often.