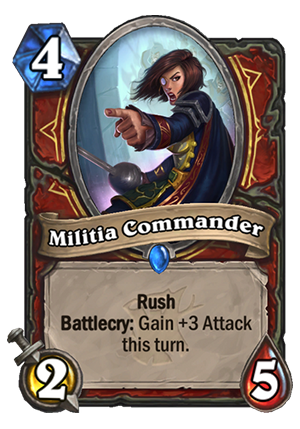 Militia Commander is a 4 Mana Cost Rare Warrior Minion card from the The Witchwood set!

She only needs two commands: "Heel" and "Sic 'em!"
Tweet

I actually like this card. It’s a bit hard to rate when you first look at it, but there is a whole other way to look at it. Let’s say that on average you will hit a 3 Attack minion, I think that’s reasonable given that it comes down on Turn 4.  You Charge it into the minion, clear it and still have a leftover body on the board. Even though the damage disappears, it’s left as a 2/2. In this case, it’s a bit like Flanking Strike, or even a Firelands Portal, which low-rolled (although you obviously don’t play it for low-rolls). You deal 5 damage for 4 mana and potentially have a small body on the board left. This is not a minion, it’s a removal that summons a minion. Because playing it without killing something is really bad – a 4 mana 2/5 is a terrible stat-line and something you never want to play in Constructed.

Now, since it has limited health, it obviously works best when hitting something with 5 life and low Attack. You can Flanking Strike an 8/8 and you would still summon a 3/3. If you run this into an 8/8, you’ve dealt 5 damage, but you’re left with no body. So while the results of this card will vary more than of the Flanking Strike. If you use it to clear a Doomsayer (with 2 damage from another source, of course), then you’ve dealt 5 damage and are left with a 2/5 body – that’s really amazing. But running it into a 5+ Attack minion is basically a 4 mana “deal 5 damage to a minion” that doesn’t go through a Taunt – while not the end of the world, it’s not optimal.

All in all, I like this card. I don’t think that it’s incredibly powerful, it’s not a card that you build your deck around, but it’s solid. Generally, cards that deal damage and leave a body behind are good, even if the body is relatively small – the Flanking Strike I’ve mentioned is one example, but also Jade Lightning (played even in the decks where Jades don’t stack very high) or Imp-losion (better at 4, given the deck it was played in, but had a potential to low-roll).

However, the one thing that this card might collide with is actually Baku the Mooneater, the revealed Legendary. It seems like Control Warrior MIGHT be a deck it finds its home in, and this is an even cost card, so it wouldn’t be possible to play both. But, since it’s too early to assume that Warriors will run Baku, I have to leave a good rating.

P.S. Even better in Arena than the Echo Taunt guy, this is like a 9/10 Arena card.