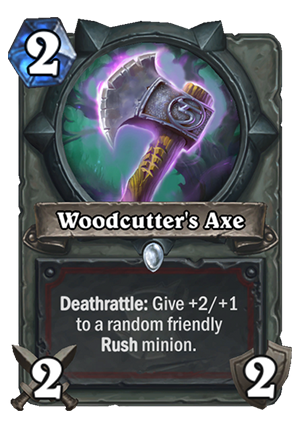 Woodcutter’s Axe is a 2 Mana Cost Common Warrior Weapon card from the The Witchwood set!

Deathrattle: Give a random friendly minion with Rush +2/+1.

They’re really pushing the Rush mechanic for Warrior this expansion, and it can actually work. Tempo Warrior used to be pretty strong back in the day, and all of these Rush cards can revive it.

This card is obviously super powerful. While a 2 mana 2/2 weapon is not something you’d normally run in your deck, the fact that it Deathrattles with a +2/+1 buff to a random Rush minion is great. The weapon itself can’t be underestimated either – after all, Jade Claws have proven that having a 2/2 weapon is not terrible in the early game. While yes, there are lots of 3 health targets, you are often able to clear a 1 or 2-drop.

And as for synergies – it’s good with every Rush Warrior card revealed so far. Starting with the Redband Wasp, it turns it into a 3/4 minion with Rush, that gains +3 Attack while its damaged. With 3/4 stats, it will be so much easier to bump it into something and ensure that it survives, leaving you with a big threat on the board. Let’s say that you run it into a 2/3 minion – you kill it and you still have a 6/2 on the board. Quite good, isn’t it?

Then, Militia Commander’s biggest issue was that after the initial burst of +3 Attack, it has quite weak stats. For example, if you clear a 3/3, it ends up being a 2/2 minion on the board. Not terrible, of course, given that it already removed something, but not amazing. With this, that 2/2 would turn into a 4/3, and that’s a solid threat by itself. Then, Darius Crowley is probably the best synergy for this card. Giving it +1 Health means that it now has a higher chance of killing something and surviving, so a higher chance of getting buffed and snowballing.

The weapon could also see play in Pirate Warrior, as it would seriously want a 2 mana weapon, but the problem is that Pirate Warrior is losing Patches the Pirate, N'Zoth's First Mate and Bloodsail Cultist all in one go, so I doubt that it will be a viable deck in Standard after the rotation.

All in all, if you use some Rush minions in your deck, you definitely want to play this. Would work best in some kind of Tempo/Midrange Warrior, but even a Control deck with some Rush cards would want it. Strong card, but it’s still hard to say whether Warrior will be good enough to see play. Because obviously, if Warrior doesn’t see play, this doesn’t see play either.