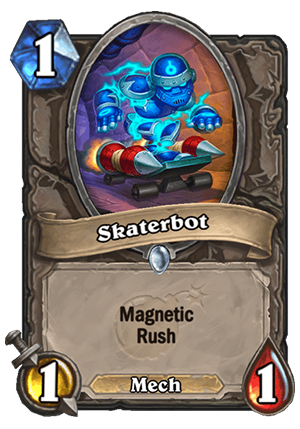 Skaterbot is a 1 Mana Cost Common Neutral Minion Mech card from the The Boomsday Project set!

If his flavor text won’t be “He was a skaterbot, she said see you later bot”, then my life doesn’t make sense anymore.

But as for he card, it looks quite strong. While a 1/1 for 1 with Rush is not particularly powerful, it’s like a worse Stonetusk Boar, it’s more like a 1 mana spell “Give Rush and +1/+1 to a friendly Mech”, and that’s some powerful stuff. It’s solid value and can make Mech decks much faster – you no longer have to worry that your big Mech will be killed without you getting any value out of it. You can Rush him, trade into something and then even when it dies, at least you didn’t lost lots of tempo. I think that it should see play in Tempo/Midrange kind of Mech decks.

That said, it seems like another broken addition to the Glinda Crowskin + Mechwarper Combo in the Wild. Sure, Zilliax is still better, but this adds redundancy. On Turn 8, you can play Glinda + Mechwarper + start spamming those, clear the entire board and end up with a big board yourself. It will be a serious APM test, but you should end up with a pretty broken board. I feel like Magnetic cards shouldn’t be able to work with Glinda for that reason.