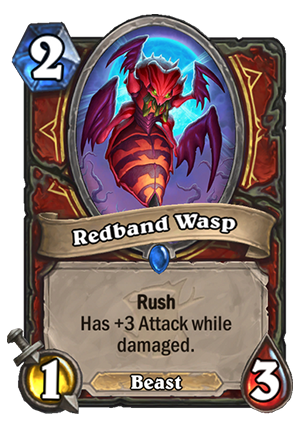 Redband Wasp is a 2 Mana Cost Rare Warrior Minion Beast card from the The Witchwood set!

Rush Has +3 Attack while damaged.

Also comes in other colors, but red's in fashion this season.
Tweet

I like the fact that they’ve introduced the Rush keyword. For example, this could be pretty broken if it had Charge. This + Inner Rage could result in some combos, as it would only cost 2 and turn it into a Leeroy Jenkins. As a Rush, you can still nuke something for 6, but that something has to be a minion.

This card in particular is pretty okay. Or, let’s put it this way – it’s good if you play against a token-heavy deck. For example, your opponent plays a 1/1 minion on Turn 1 – you kill it and still have a 4/2 on the board, a 4/2 that can actually attack him next turn. Even if your opponent plays a 2/, it should still be good – clearing a 1-drop and having a 4/1 minion is not bad.

Which makes it a great card against Paladin, for example. You can clear something small, even their 1/1 from Hero Power, and have a 2 mana 4/2 minion.

But then, against minions with more than 1 health, you can’t really get a free trade. Let’s say your opponent plays a 2/3 2-drop, then it’s ultimately 1 for 1. Given that the 2-drop probably did something for your opponent (like Arcanologist), it’s not a good deal. It gets even worse against 3 Attack minions – for example a 3/3, which is a pretty common stat-line. If you want to kill it, you have to play this, activate it first with e.g. Whirlwind and only then kill the minion, not very efficient.

Of course, later into the game you might use it alongside a Whirlwind effect that you would use anyway. A 4/2 minion with Rush for 2 mana is basically “deal 4 damage to a minion”, which is a solid 2 mana card, but honestly, it’s not super impressive.

So the best case scenario is facing an aggressive deck in the early game. This will definitely be a meta-dependent card, but just like the last one, I could see it being played in some sort of Tempo/Control Warrior focused on the Whirlwind effects. But then again, such deck would ALREADY be good against Token-heavy decks, like Dude Paladin… so I’m not too excited after all.