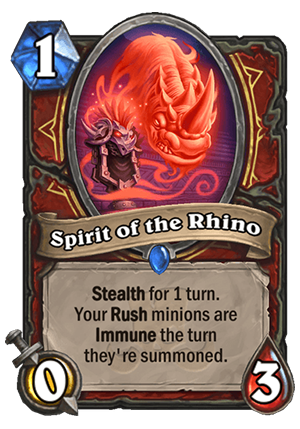 Spirit of the Rhino is a 1 Mana Cost Rare Warrior Minion card from the Rastakhan's Rumble set!

Stelath for 1 turn. Your Rush minions are Immune the turn they're summoned.

Spirit of the Rhino Card Review

This might be one of the best, if not THE best Spirit card, but it also fits into an archetype that hasn’t been very successful in the past, and it might actually not change that.

What I like about it is mana cost, making it very flexible. In the mid or late game, you can drop it on the board without really using a big chunk of your mana pool, and then play one or two Rush minions and keep them alive. But even a more basic scenario – you play this on T4 with your 3/3 Rush and run it into another 3/3. It’s basically as if you played a 1 mana 3/3, given that you “saved” your Rush minion at full health for just 1 mana. And then, you will often be able to use the same effect next turn, unless your opponent decides to AoE down your board (or play anti-0 attack minion tech cards).

The main problem I have with this card, and with Rush Warrior in general, is that the deck is already good vs minion-based decks. Rush minions let them pick the favorable trades, gain extra tempo etc. and dominate the board. However, the deck starts getting really weak vs any kind of Control and Combo builds. If your opponent plays no minions (and those deck can skip multiple turns without playing a minion), then your Rush keyword is useless and you’re playing a bunch of understatted minions that you still have to drop, because you need to put the pressure (if you don’t, they will just take you to the late game and win with their own strategy). Making your minions immune doesn’t really help that. I mean, sure, it can be relevant in the late game – they drop a big minion, you play this + 2x Rush minion and kill it, while yours survive. But it won’t actually be a big help when it comes to winning vs slower decks. It won’t help you put the early game pressure that much.

On the other hand, it should help in the Midrange matchups. Against Aggro, you won’t need it to make efficient trades most of the time anyway, and against Control you they won’t drop enough minions for this to be relevant. But against Midrange, they also play efficiently statted minions, meaning that your Rush won’t necessarily trade into them favorably, making this a solid option.

I’m quite sure that the card will be good in Rush Warrior, but Rush Warrior might still not be good enough.