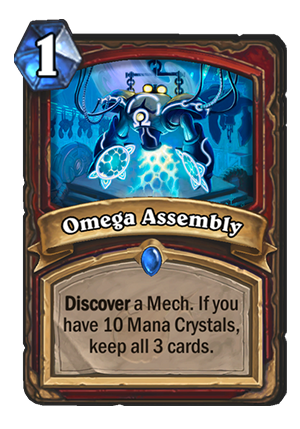 Omega Assembly is a 1 Mana Cost Rare Warrior Spell card from the The Boomsday Project set!

Discover a Mech. If you have 10 Mana Crystals, keep all 3 cards.

They told Dr. Boom he could only pick one. He disagreed.
Tweet

The card is amazing. By far the best of Omega cards so far. I’d even say that it’s one of the better cards revealed so far. Discovering a Mech for 1 mana is your Standard Raven Idol, Hallucination, Blazing Invocation etc. 1 mana discovers are quite common and get one relatively often. Some of them were good enough to be playable, others were just slightly too weak, but I have to say that in general, those cards are okay in the right deck.

So, Discovering a Mech for 1 mana is average. The card would be like a 5/10, it might see some play in Mech Warrior, but it wouldn’t be exciting. However, the Omega effect makes it way, way more powerful. In the long games versus slow decks, when you really need value, you get 3 random Mechs for 1 mana (getting all 3 options from Discover is basically getting 3 random cards – except you will never get duplicates). That’s an amazing value tool. Most of the high value cards make you lose tempo, but not this one. 1 mana is often irrelevant so late into the game and you can squeeze it into most of your turns. If you’ve played Dr. Boom, Mad Genius already, then those three Mechs will also have Rush. If Mech Warrior will be a thing, this card will 100% see play. To be honest, the Omega value is so good that it might see play even outside of the Mech decks. Even without extra synergies, getting 3 random Mechs in the late game for just 1 mana is a great refill.