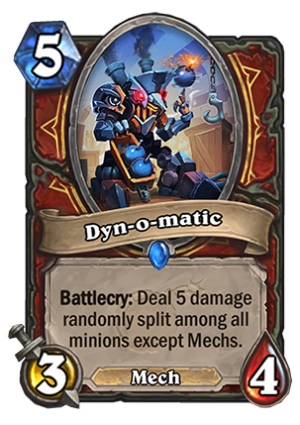 Dyn-o-matic is a 5 Mana Cost Rare Warrior Minion Mech card from the The Boomsday Project set!

Battlecry: Deal 5 damage randomly split among all minions except Mechs.

This is another card which proves that Mech Warrior will most likely want to play a Control style. Tempo decks usually want to drop stuff on the curve, not really hold off onto them, and this might be amazing in some situations, but it’s not your usual 5-drop that always works. It’s like a removal with a body attached. It might be played in a more Tempo deck if the meta demands it (like people are running lots of board flood decks, then it can be a nice addition), but I see it mostly as a Control card.

3/4 body costs 3 mana, so you’re getting 5 damage for 2 extra mana. However, that damage is spread between non-Mech minions, making it quite useful in a range of situations. Just two examples – if you’re playing against Odd Paladin and they have a bunch of 1/1’s on the board, you drop this and it clears. On the other hand, if you play against some deck that just dropped a 5/5 minion on the empty board, you can also play this and it clears. Fun, right? You can also combo it with Acolyte of Pain to draw 3 cards immediately, and possibly hit something your opponent has on the board too. But since it’s situational, it means that you might need to hold onto it for multiple turns to find the right board – hence why it might work best in a Control deck.

I like this card, it’s not particularly impressive, it’s no Vilespine Slayer, but it should be useful lots of times. Removals attached to bodies are generally pretty solid, especially if you can somewhat control the outcome. I’m super glad that it can’t hit the face, because it would make the card way, way less consistent.