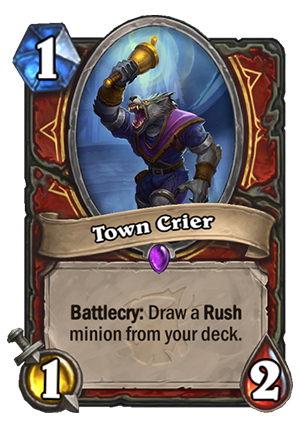 Town Crier is a 1 Mana Cost Epic Warrior Minion card from the The Witchwood set!

Battlecry: Draw a Rush minion from your deck.

When he was younger, he was the town crybaby.
Tweet

It’s not flashy, it doesn’t have a crazy effect, but it’s basically the strongest card in the entire expansion. 1 mana 1/2 that draws you a card, and a specific card on top of that (tutor effects are usually stronger than regular card draw) is absolutely insane. It will be an auto-include in any Warrior deck running Rush minions – so definitely the Tempo/Midrange build, but probably a Control Warrior too if he they decide to run Rush minions as well.

This card is on Kobold Librarian levels of power, maybe even stronger (given that Warlock has Life Tap and Warrior actually needs to add card draw to the deck). It’s better than Arcanologist, which is already a busted card, because it’s the same effect for 1 less mana.

One thing I absolutely dislike about this card is rarity. The effect is not unique, it’s not cool or complicated. It’s just plain, simple, and we had lots of similar cards in the game already – most of them being Common or Rare. This is an obvious auto-include, probably in multiple Warrior decks. It’s not a choice, you will simply HAVE to play this card in those decks. And it’s Epic, making the entry barrier so much higher. 2 necessary Epics are often even harder to get than a Legendary, e.g. I have every Classic Legendary there is (from packs opened over the years) and I’m still missing lots of Epics. It means that lots of people will simply have to craft them when wanting to play Warrior.

But yeah, the card is absolutely busted. Not much more to say about it. The only way for it to not see play is if Warrior will still be bad after the rotation.