Paladins are the warriors that serve the Holy Light. Instead of focusing solely on their physical abilities, they embrace Holy magic to improve their defensive and offensive capabilities. The first order of Paladins (Knights of the Silver Hand) was created after the First War, by Uther Lightbringer himself, to help the common folk. Later Paladins started to specialize in protecting people from all that’s evil – mainly the Scourge (undead) and the Burning Legion (demons).

Paladins have three main specializations. They can wear a shield and boost themselves with protective spells while attracting the enemies’ attacks, heal wounded allies and revive fallen ones, or equip a two-handed weapon and rush straight into the combat, relying mostly on their physical skills. 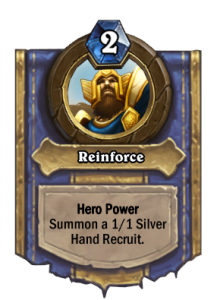 Paladin’s Hero Power is Reinforce. After using it, Paladins summon a 1/1 Silver Hand Recruit minion. The Hero Power is especially powerful against classes that can’t deal one damage easily, so you can create multiple small minions over time and grow your board. It gives Paladin an unending source of minions. They are weak by themselves, but give Paladin a body to buff and synergize with cards like Quartermaster or Lightfused Stegodon.

Secrets are a mechanic that’s unique to Paladin. While two other classes also have their own Secrets, they’re all significantly different. Paladin’s Secrets are the cheapest ones, they only cost one mana each. It makes them weakest in terms of value, but strongest in terms of tempo. The only exception is Getaway Kodo, which is a purely value card, but can often be played around by pinging a Silver Hand Recruit.

A Paladin build based around Secrets dominated the meta for some time, though it’s still rather popular in the Wild. Secret Paladin was really strong thanks to the insane tempo Mysterious Challenger provided. In Standard, Secrets aren’t actually put into decks, but they still see quite a lot of play thanks to Hydrologist – with the Discover mechanic, Paladin is able to pick the right Secret for the situation. It makes even the worst Secret – Eye for an Eye – situationally useful (e.g. against a Mage with Ice Block).

There are also some ongoing themes when it comes to the Paladin cards. When new cards are released, there is a significant chance that some of them will fall into one of those categories:

Here are the Paladin decks you can use on the ladder in the current meta. While not every deck listed here is high tier, they all should be viable options, especially to climb through the lower ranks.

The archetype of Aggro Paladin has been around since the Vanilla days of Hearthstone. The sheer amount of cheap attack-based buffs and minions combined with Divine Favor for refilling your hand provides enough power to overwhelm even the strongest control decks.

Prince Keleseth and a bunch of other additions after the release of Knights of the Frozen Throne brought Aggro Paladin back on the table; but this Kobolds and Catacombs version of Aggro Paladin works perfectly without the Blood Council brother, mostly due to one new card: Call to Arms.

As it is with most aggressive decks, the motto of this deck couldn’t be more simple: Go face when you can. And it really has to be the motto, just because it represents the main win condition of this version of Aggro Paladin.

With a total of five Kobold and Catacombs cards, this deck received a lot of new tools with Hearthstone’s most recent expansion.

Being more of a meme than anything for the longest time in the history of Hearthstone, Murlocs are now an integral part of the meta-game. The vanilla tribe received heavy reinforcement with the releases of Mean Streets of Gadgetzan and Journey to Un’Goro; especially Paladin’s Hydrologist makes the addition of the standard Murloc package almost mandatory in most decks.

With the reign of control decks in the current meta-game, reliable and fun aggro alternatives are in dire need, and Murloc Aggro Paladin is surely one of them.

In general, the archetype and its win condition doesn’t change with Hearthstone’s newest expansion.

However, the list received a total of six possible new cards  to include. Being the most mandatory, Corridor Creeper, the dark horse of Kobolds and Catacombs, seems to be a perfect addition to any aggro deck, and that includes Murloc Paladin. The sheer power level it can create when dropped on early turns is unmatched.

Another star of the expansion is Paladin’s new spell Call to Arms. With almost half of the deck being two- or less-mana drops, this card will always pull out something useful to interact with the board.

Last but not least is Unidentified Maul: The new Paladin weapon that can transform into four different weapon types will bolster your board with effects like Divine Shield or +Attack.

When thinking about the control archetype, Paladin has always been one of the first classes that comes to mind. Cards like Tirion Fordring, Equality, and Aldor Peacekeeper allow Paladin to take huge value turns even when drastically behind on the board.

With Kobolds and Catacombs further increasing the power level of decks in the game, the traditional Control Paladin strategy of outlasting the opponent has become even more difficult. While it is still possible to outlast aggro decks, Paladins are generally unable to answer the powerful win conditions of other control decks through removal and a couple of big threats alone. Arguably, Control Paladin has always lacked an end game to effectively challenge other control decks, but with the traditional lists this is now even more pronounced.

Nonetheless, the archetype has found new ways to survive. Including bigger swing turns is now more important than before, and N'Zoth, The Corruptor can help with that. Alternatively, comboing down your opponent with Auctionmaster Beardo is a fun and at least somewhat viable end game strategy. As for the early game, Call to Arms provides the means to effectively challenge the current aggro decks that are happy to kill your Turn two Doomsayer. The life of Control Paladin is not easy in the Catacombs, but it is still viable.

If you’re a new player without a big collection, you might be looking for a way to play Paladin without spending a lot of your Dust on the Legendaries.

This deck is a Midrange Paladin with a slight focus on the token synergies. Tokens are the cards you spawn through extra effects, like Battlecries or – in case of Paladin – your Hero Power. They’re usually small, but also cheap and disposable. While there aren’t many Basic token generators (Razorfen Hunter is pretty much the only decent one), the Hero Power will still make some of the Basic cards more powerful than in the other decks. Two best examples are Frostwolf Warlord and Stormwind Champion. Normally, it might be pretty hard to get more value out of them, however with a Hero Power that spawns 1/1’s, those cards might just win some of the games. Besides that, Paladin is one of the only Basic decks that uses weapons. They’re great in a way that they usually give Paladin a card advantage, but at the same time, they drain the life total much faster than usually.

The Midrange Paladin Basic deck is a bit harder to pilot correctly than a more straightforward deck like Druid. Given that the deck runs many buffs or cards which power depends on the board state, smart trading, controlling the board and utilizing weapons correctly is often the key to win the games, which might be pretty difficult for the new players piloting it. On the other hand, playing this deck might help you learn the basics of the trading, when it’s worth to do it, when it’s better to pass up, how to use life as the resource when playing weapons etc. The deck is more challenging, but can also be more rewarding if played right.

Handbuff Paladin is a relatively new archetype. Whole “handbuff” mechanic was first introduced in the last year’s Mean Streets of Gadgetzan expansion as a part of the Grimy Goons gang. It was generally considered to be worst of the gangs, with the mechanic not being really utilized until a whole expansion later – Journey to Un’Goro. That’s where the first semi-viable Handbuff Paladin list was really created.

Handbuff Paladin is based on two types of cards. First – handbuffs. Cards like Smuggler's Run, which buff every minion in the Paladin’s hand. And second – buff targets. Basically cards that work better with handbuffs – those might be cards that replace themselves in your hand (Fire Fly, Stonehill Defender) or that spawn multiple bodies, each profiting from the buff (Saronite Chain Gang, Doppelgangster).

Handbuff Paladin isn’t a particularly powerful deck. Even though Paladin is doing fine right now, other decks require multiple Epics and Legendaries to work. Which makes Paladin a very weak budget option right now, unless you really want to play the class.

Every two levels, up to level 10, you will get two copies of a Basic class card. A lot of those cards are staples, so it’s heavily advised to highly prioritize getting every class to level 10.