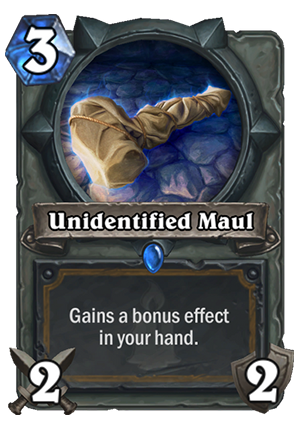 Unidentified Maul is a 3 Mana Cost Rare Paladin Weapon card from the Kobolds and Catacombs set!

Gains a bonus effect in your hand. 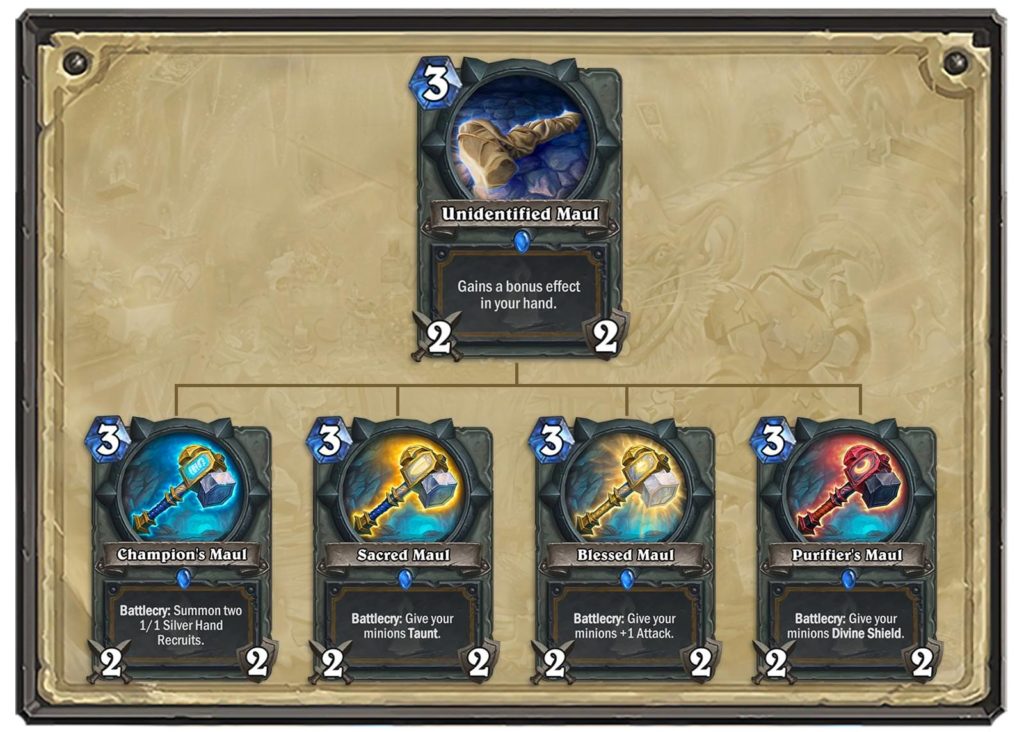 Another entry into the Unidentified cards, the maul is an interesting tool for Paladins to work with. Right off the bat, we have to talk about the baseline weapon, a 2/2 for 3 mana. Let’s be honest, that’s simply not exciting, especially with Rallying Blade being in the same rotation for a little while longer. Normally we don’t go into the nitty gritty of mana costs and “what’s worth what” because that’s simply a bad way to analyse cards, however here we have a direct parallel with another weapon that costs 3 and also has 2 durability, except it features 1 more attack point and still has an upside, which in all fairness is a lot more conditional. We have also established that 3 attack is very crucial and a lot more important than 2, given the state of early threats at the moment. So we ask, are Unidentified Maul‘s effects worth giving up the extra attack and all the relevant things that go along with it?

My answer is… maybe. Champion's Maul is the only one that doesn’t rely on minions already being there – it brings them! It’s hard not to draw comparisons with Muster for Battle, which was a dominant Paladin card during its time in Standard and is still considered one of the more powerful cards in the Wild format. It summons an additional Silver Hand Recruit, however it also gives you a much worse weapon and while in general the extra 1/1 is better, arguments could at least be made for spots where the 2/2 weapon is a lot more impactful and the two cards seem actually comparable. And you know a card is good if it’s comparable to Muster for Battle. As far as the other options for Unidentified Maul go, while they don’t look as great as their Champion cousin, they are still good cards for aggressive Paladin decks. Note that they care about minions, not necessarily Silver Hand Recruits, so any early board is going to be empowered by one of these in their own way, which can actually be a lot more sought after of an effect that the 3 attack of Rallying, in something like Murloc Paladin for instance. And even if everything else isn’t good enough, sometimes the 1/4 chance for having access to Muster for Battle in your deck might be good enough to play this.